Defamation Claims In Divorce Proceedings or Between Ex-Spouses – Do You Have a Libel or Slander Lawsuit Against Your Ex?

Divorce cases usually result in raw emotions be exposed.  The parties become more vulnerable as they proceed from the decision to end the marriage to the time when the final divorce judgment has been entered.  In most cases, each spouse is hoping to have the marriage become part of their past as they move forward in life.

Sometimes, divorces can take a long time to conclude causing the parties to face lots of personal hurdles like being able to manage their anger, resentment, pain, and even rage.

Consider the recent news coverage of a divorce case in New York which has been in the courts for ten (10) years.  In that case, not only are property issues and child custody matters being considered by a judge, but so are defamation claims involving statements made by one spouse about the other.

Just like in other types of defamation cases, certain elements must exist and be proven in order to prevail in a libel or slander lawsuit between divorcing spouses. However, while a divorce is still in progress, there are some additional issues to deal with in order to prevail on a defamation claim. While the case is ongoing – no matter how long that might be – special “privileges” can apply to communications between or about each spouse to prevent a claim from proceeding.

As a Florida appellate court has explained:

[D]efamatory statements made in the course of judicial proceedings by parties, witnesses and counsel are absolutely privileged, no matter how false or malicious those statements might be, provided the statements are relevant to the subject of inquiry. See Levin, Middlebrooks, Mabie, Thomas, Mayes & Mitchell, P.A. v. United States Fire Ins. Co., 639 So.2d 606, 607 (Fla.1994); Ponzoli & Wassenberg, P.A. v. Zuckerman, 545 So.2d 309 (Fla. 3d DCA 1989); Wright v. Yurko, 446 So.2d 1162, 1164 (Fla. 5th DCA 1984). Torts such as perjury, libel, slander, and other actions based on statements made in connection with a judicial proceeding are not actionable.

It’s not uncommon for one spouse to say harmful things about the other spouse while the divorce is pending. Your wife states (to friends, co-workers, Facebook followers, etc.) that you are using cocaine during some part of the divorce proceedings, for example. Or maybe your husband claims (by posting on Instagram or in texts) that you gave him gonorrhea while you were married and living together. Neither statement is true. However, each statement could be harmful to one’s reputation. 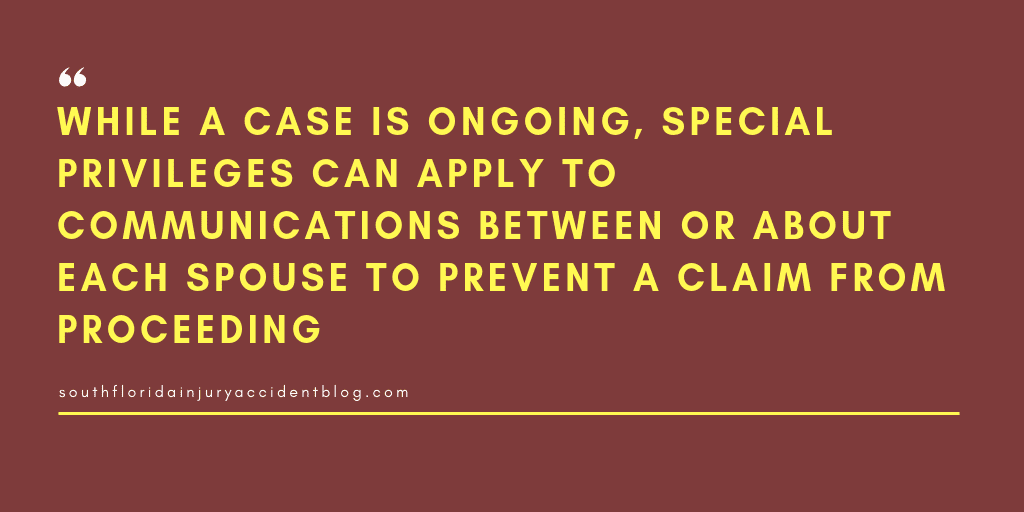 But, The Litigation Privilege May Cause The Defamation Claim To Fail: The Keys To Prevailing With This Type Of Injury Claim Are Where And When Statements Were Made

Thus, if these statements were made during the actual divorce proceedings, then a “privilege” defense will prevent the defamation claim from being adjudicated. Stated another way, if these untrue statements are made in the courtroom, during a deposition, in a mediation, or another type of proceeding involving the divorce lawsuit, then the claim will fail.

Again, the key is when and where these harmful statements were made. So, if the untrue or derogatory statements are made in the court house elevator, at a bar or online (Facebook, Twitter, Instagram, etc.) for example, before or after the divorce is final, and heard and seen by lots of folks, then that’s arguably not part of the divorce proceeding and a defamation claim may be immune to a privilege defense (meaning, the claim can proceed).