Defamation Claims Against A Condo Association Or HOA

Suing Your Association For Libel Or Slander

Generally speaking, Florida law allows for the filing of a defamation lawsuit if a Condo or Homeowner’s Association (the officers or directors) makes false statements that damage one’s reputation.  The statements can either be libel (written) or slander (spoken). (Read our earlier posts for details on the elements needed to prove a defamation lawsuit in Florida and what damages (money awards) are available under Florida law for libel or slander.)

Does Every Offensive Statement Made By A Board Member Of A Condo Association Or Homeowner’s Associations Give Rise To A Defamation Claim?

Anyone who has lived in a neighborhood or community that has a governing body knows that these living arrangements can sometimes be stressful. Not every resident agrees with everything; neighbors can get into controversies with each other and owners can become conflicted with association board members or the Association itself.

However, when statements are made by the Association against a member of the neighborhood that are so awful, then Florida law allows the injured person to sue to recover their damages.  However, not every offensive statement gives rise to a recoverable defamation claim. 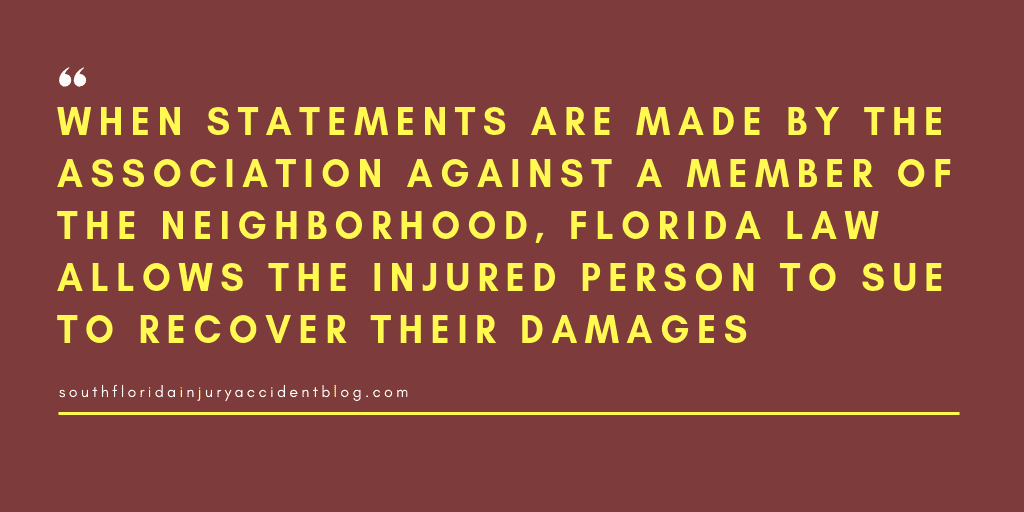 Consider the following recent cases as two examples of condo and homeowners’ associations being sued for defamation in Florida courts:

Back in 1985, a cooperative homeowner’s association named Dale Village owned a Broward County mobile home park and Dale Village contracted with a company named American Ideal Management to be its park manager. In September, Dale Village ended the deal with American Ideal and there was some controversy over this termination.

Dale Village’s board of directors dealt with the controversy by posting 2 public bulletins which gave their side of the story, putting in writing for all to read the directors’ alleged reasons for terminating the park manager, and as icing on the cake they also posted the letter that was sent to the manager that detailed their allegations of rules’ violations and other things.

These were posted on the recreation hall’s front door at the mobile home park, where lots of people stopped by (not just residents of the park) to do activities like play bingo. They were also handed out during a Dale Village board of directors meeting.

The park manager sued for defamation, alleging that the bulletins were false and published with malice. The appeals court allowed the case to proceed to trial, denying the summary judgment request of Dale Village.

Here, the plaintiff failed to prove a defamation claim under Florida law.  After filing an Amended Complaint, the Plaintiff seeking defamation damages pled that defendant Reynolds made:

“… statements to others that Plaintiff[,] while he was the President of The Terraces At Beachside Condominium Association, Inc., took actions and neglected to take action that seriously harmed the interests” of other unit owners. (Doc. 24 ¶ 21.) Plaintiff further alleged that Reynolds’ statements were “confirmed by a letter dated September 13, 2010 sent by [her] personal lawyer to Vincent Gallagher, Esquire on [Reynolds]’s behalf.”

Even though the amendment gave Reynolds the chance to provide much more detail in his pleadings on the alleged defamatory statements, the Complaint did not give specifics on what exactly was stated, or to whom these defaming statements were made. Also, while a letter is referenced, it was not included in the paperwork that was filed (as an exhibit or attachment to the Complaint).

So the court denied the defamation claim. Here’s their explanation (emphasis added):

Despite this Court’s clear description of Count III’s pleading deficiencies, its skepticism that Plaintiff could properly amend to state a cause of action against Reynolds for slander per se, and its proviso that he should only replead if he could do so in good faith, Plaintiff filed a Second Amended Complaint that is essentially identical to the Amended Complaint. The Second Amended Complaint adds one new allegation to one paragraph of Count III; namely, Plaintiff has identified some of the “others” to whom Reynolds’ alleged defamatory statements were allegedly made. (See Doc. 38 ¶ 21.)[2] In addition, Plaintiff has now attached one page of the letter from Reynolds’ attorney which purportedly “confirms” that Reynolds made the defamatory statements. (Id. Ex. B).[3] The letter contains one sentence—which has been underlined by hand, presumably by Plaintiff—that mirrors the vague language of Plaintiff’s original allegation of slander per se: “While [Plaintiff] was president of The Terraces at Beachside Condominium homeowners’ association, he took actions (and neglected to take action) that seriously harmed their interests.” (Id.)[4]

As the Court noted in its previous Order, this language falls well short of Florida’s threshold for slander per se. See Perez v. City of Key West, Florida, 823 F.Supp. 934, 938 (M.D.Fla.1993) (“Defamation, whether libel or slander, must expose a person to hatred, contempt or ridicule or cause them to be shunned or avoided, or injure them in their business or occupation. . . . [W]ords are actionable per se if by general consent their character is injurious e.g., conduct, characteristics or condition incompatible with the proper exercise of one’s lawful business, trade, profession or office”)(citations omitted). Moreover, even if the statements attributed to Reynolds could somehow be considered defamatory, the letter which allegedly “confirms” Reynolds’ publication of them in no way supports Plaintiff’s allegation that she defamed him to Joseph Scanlan, Virginia Germond, Michael D. Langford, Donna McEntyre, or anyone else. Accordingly, Reynolds’ Motion to Dismiss Count III will be granted, and Plaintiff’s action will be dismissed with prejudice.

A good piece of advice if you believe you have a defamation claim against your Condominium Association or HOA, is to at least speak with an experienced personal injury lawyer before you file a claim to learn about some of the issues that can arise with these claims, including the type of evidence needed to prove a claim and the type and amount of damages you can recover. Most personal injury lawyers, like Alan Sackrin, will offer a free initial consultation (over the phone or in-person) to answer your questions.

Can I sue a board member of my association for slander or libel?