The wrongdoer (tortfeasor), no matter how negligent, is not responsible for compensating a victim for all of his or her damages.

Compensatory damages do not always fully compensate in grievous situations nor do they have a general salutary effect under prevailing conditions to promote fair treatment of the public. At best, litigation, even when successful is an inconvenience, often an ordeal. Compensatory damages do not sometimes offer reparation for mental invasion. Moreover, it is difficult to translate pain and suffering, disfiguration, loss of enjoyment of life, loss of prospects, into compensatory dollars.

What Type of Personal Injury Damages Are Allowed Under Florida Law?

Generally speaking, personal injury damages cannot be precisely determined. Jury’s use their discretion, as outlined by the judge in the jury instructions, to try and return the victim to the condition he or she was in before the accident. They do so by compensating victims for:

Economic damages are those that can be documented by invoices, tax returns, pay stubs and similar documents. The most common economic damages recognized by Florida law, include:

Non-economic are those damages that cannot be determined, or estimated, by looking at numbers on a piece of paper. These damages include things like:

While it’s is not that easy to quantify pain that someone feels, and it’s true that some may be more pain tolerant than others, to determine damages for non-economic damages, a jury can also consider: 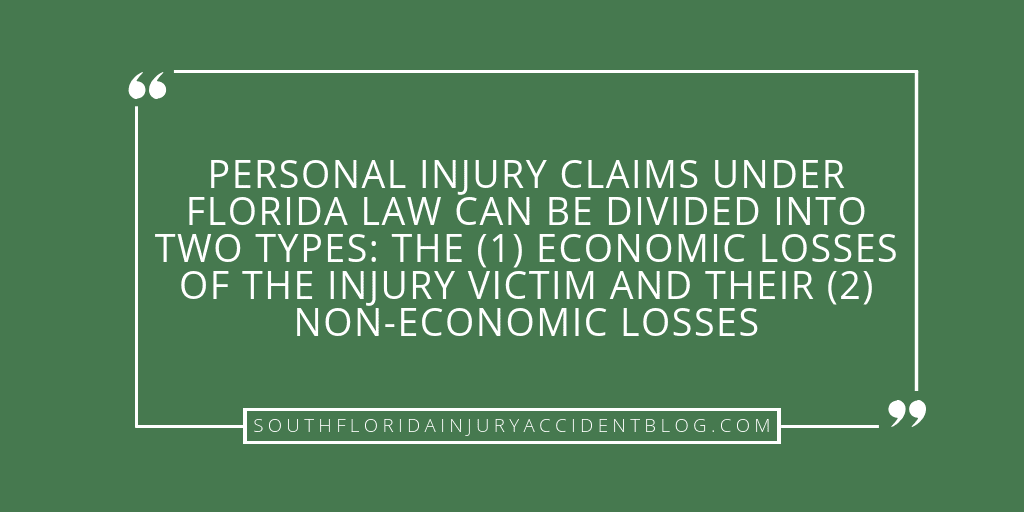 Not every harm is covered. One example of damages that are not covered in Florida: the emotional distress felt by someone who sees an accident or experiences a traumatic event unless your psychological trauma has manifested into a physical illness. As explained by the Florida Supreme Court in Champion v. Gray, 478 So.2d 17 (Fla. 1985):

The complaint in the case alleges that Mrs. Champion heard the accident, came immediately to the accident scene, and suffered severe emotional distress and shock which led to her death shortly after seeing her injured child. The requirements set out in this opinion have been met. No physical impact to her need be alleged because she suffered discernible physical injuries (death).

Accordingly, we answer the certified question, as limited, in the affirmative. We hold that a claim exists for damages flowing from a significant discernible physical injury when such injury is caused by psychic trauma resulting from negligent injury imposed on another who, because of his relationship to the injured party and his involvement in the event causing that injury, is foreseeably injured.

A good piece of advice if you have been harmed due to negligence, is to speak with an experienced personal injury lawyer to learn about some of the issues that can arise with these claims, including the type of evidence needed to prove a claim and how a jury will respond to certain types of damage claims. Most personal injury lawyers, like Alan Sackrin, will offer a free initial consultation (over the phone or in-person) to answer your questions.