Are You Responsible for Your Party Guests?: Social Host Liability for Accidents Under Florida Law

Across the country, “Dram Shop Laws” create legal liability for bar owners and operators as well as people who host events and parties where alcohol is served. Under these laws, if someone leaves the bar or restaurant or catered reception or graduation party and drives while intoxicated, causing an accident, these statutes allow for the injury victims to sue not only the drunk driver but the persons who served the drinks that got him or her drunk.

Dram shop laws are independent from laws regarding the selling and/or sharing of alcoholic beverages to those under the legal age to drink (which is 21 in Florida). If you give someone alcohol and they are underage, or if you share illegal drugs with them, then you have an entirely different set of legal liabilities to face if they are in a car crash and innocent people get hurt. For example, Florida law makes it illegal to give alcohol to a minor and a social host who is found to have done so can have their driver’s license suspended (among other penalties).

Dram shop laws are also distinct from the laws against taking drugs, including smoking pot, where the impaired driver causes a wreck. 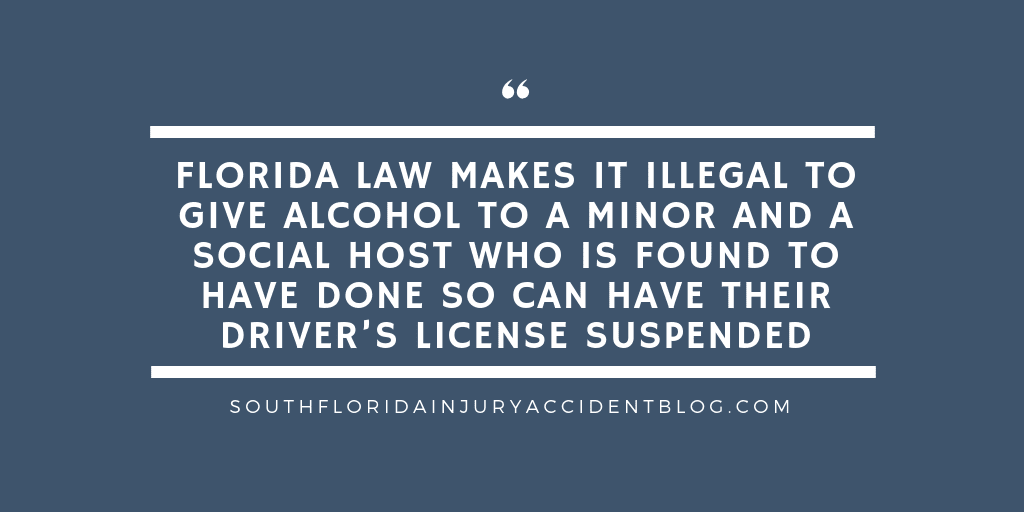 In Florida, Florida Statute 768.125 is the state’s “dram shop law” and it makes vendors legally liable for any harm that comes to someone served alcohol at their establishment who is a minor or is in someway alcohol-dependent.

It targets businesses and it applies to any business operation that is selling or serving alcoholic beverages.

It also targets people who serve alcohol to someone who is under the age of twenty-one (21) years (the state’s lawful drinking age) or someone who is known to be an alcoholic.  These people are considered to be “social hosts” with legal duties.

Do Social Hosts Have a Limited Duty?: Minors and Adults Known to Be Addicted to Alcohol

The Florida law is narrow in how it is written and for now, only certain victims will be able to hold servers and suppliers accountable and subject to a civil damages claim under the Dram Shop Law.

It SPECIFICALLY DOES NOT EXTEND to adults who get drunk and are not habitual addicts.

So, for example, if a bridal shower or bachelor party or graduation celebration is held at a local Miami restaurant or Fort Lauderdale bar or Hallandale Beach hotel, and a guest gets drunk and drives away only to get in an accident where both he and the people in the other car are hurt, then (1) the driver and (2) the vendor (restaurant, bar, hotel) may be liable to the victims for their damages but the hosts of these parties are not.

Similarly, if a brawl breaks out between inebriated guests at a bachelor party, and innocent people get hurt, the bar as well as those involved in the fisticuffs may be held liable but not the social host of the gathering. The best man who organized that bachelor party is not liable as a “social host” under the Florida Dram Shop law.

This is true even if the host or hostess knew that the person was drinking too much, or was a minor who was drinking, or that the guest was about to drive away in an inebriated state. The Florida Dram Shop law does not apply to these social hosts or hostesses to make them accountable for looking the other way.

The EXCEPTION: If the guest is known by the social host to be an alcoholic OR if the guest was under the age of 21 years old, then the law will provide a basis for a legal damages claim against the host or hostess.

What if the victim isn’t a known alcoholic or a minor? That doesn’t mean that the injury victim, with competent personal injury legal counsel, cannot seek legal remedies against those social hosts; it just means that Florida Dram Shop Statute does not apply as the basis of a claim.

For instance, if the innocent victim of the bachelor party brawl suffered physical injuries, then they may be able to file claims against the host under Florida’s premises liability law.

Those injured in a car crash involving a drunken guest leaving a graduation celebration may be able to file claims against that host under negligent entrustment of a vehicle.

Lesson: Dram Shop Claims May Not Be the Only Civil Claims Available

Bottom line, in Florida there are critics of the current dram shop legislation that argue it is too narrow and that Florida should follow other states and broaden the liability for social hosts in order to provide greater justice for injury victims in these situations. Perhaps future Florida lawmakers will agree with this position and our statute will be expanded to recognize a sweeping liability of social hosts under the Florida dram shop law.

Until that happens, however, it’s important for injured victims to know that even if the insurance adjusters or other interested parties are quick to point out that there is no “social host liability” in the State of Florida at this time, it DOES NOT MEAN that there is no legal claim for damages available to the victims.

It’s important for people who have been injured through no fault of their own, particularly those who have been hurt by someone who was inebriated or intoxicated at the time of the accident, to investigate all the ways that Florida law may provide them relief and justice.

A good piece of advice if you have been harmed in a car accident involving alcohol is to at least speak with an experienced personal injury lawyer before you file a claim to learn about some of the issues that can arise with these claims, including the type of evidence needed to prove a claim and the type and amount of damages you can recover. Most personal injury lawyers, like Alan Sackrin, will offer a free initial consultation (over the phone or in person) to evaluate your case and answer your questions.