What duty of care does a Florida hotel owe to someone visiting a hotel guest?

According to Florida case law as of the date of this article, a person entering a hotel to communicate with a registered guest is required to receive the same degree of care that the guest is entitled to receive from the hotel. This principle is based upon the fact that the operator of a hotel is required to anticipate that a registered guest would have business and social callers. Generally speaking, hotels owe a duty to all invitees to provide reasonably safe ways of ingress and egress for those legally entering and leaving the hotel premises.

The Slip and Fall In The Hotel Movie Room

In the Steinberg case, one afternoon Essie Steinberg went along with two friends to the Cadillac Hotel.  None of the three women were guests of the hotel, nor did they intend to register or stay at the Cadillac.  They went to the hotel to deliver a message to a friend who was officially registered as a hotel guest.

The hotel employee at the front desk assisted them in trying to find their friend, who was not in the hotel at the time.  So, Essie and her two friends decided to leave a message with the front desk for their friend.  While they were there in the lobby, they decided to check out the establishment.

The three explored several of the lounges within the hotel.  They looked into other rooms that were adjacent to the lobby, too.  Essie and her friends checked out the “TV Room,” but they did not like the program that was showing at the time.

The three left the TV Room and went next door, into the “Movie Room”  which was showing a movie at the time.  The room was dark, except for the light from the movie screen and the movie projector.

Essie and her friends were not aware that the floor to this room was 4 inches lower than the level in the TV Room.  Stepping into the dark Movie Room, Essie stumbled and fell and got hurt.

The owners and operators of the Cadillac Hotel refused to settle her claim for damages, forcing Essie Steinberg and her husband to file a personal injury lawsuit seeking compensation for her harm based upon negligence.

The hotel moved the trial judge for a “summary judgment,” arguing that Essie Steinberg was not allowed to recover damages under Florida negligence law because she was not a registered guest of the hotel.  Instead, she was a “mere licensee” and as a matter of law, could not recover damages from the defendant.

Essie and her husband appealed the judge’s decision to the Florida appellate court, asking that the summary judgment be reversed and the case be allowed to be tried before a jury.

Their argument was that Essie Steinberg was indeed an “invitee” of the Cadillac Hotel at the time she slipped and fell in the hotel’s Movie Room.  Accordingly, the hotel owed her a duty of care to furnish her, as an invitee, with reasonably safe premises.

The hotel argued on appeal that no, Essie was a licensee, and their only duty to her was a limited one:  to refrain from willfully or wantonly injuring her. 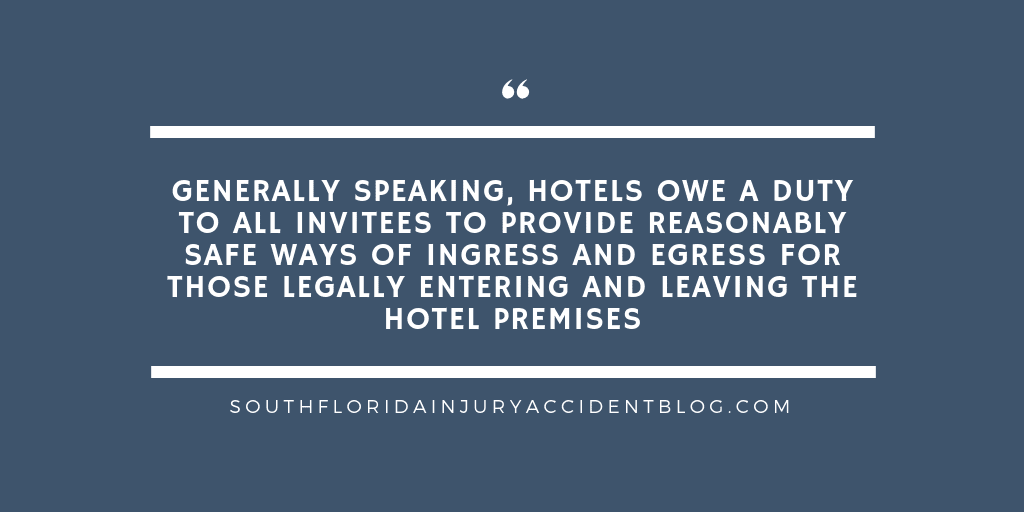 First, the court recognized that any registered guest of a hotel is a “business invitee” under Florida law, and that anyone who comes into the establishment to communicate with a registered guest is entitled to receive and enjoy the same degree of care. The guest of the guest is also an “invitee” insofar as the duty of care placed upon the hotel.

However, the law also works to establish definitions and limitations on this duty of care.  It is not required under Florida law for any hotel to be “an insurer of the safety” of anyone who is roaming around its public areas.

While the registered guest should be able to invite callers to the hotel to visit him or her for either business or social reasons, there are limits on the duty imposed on the hotel to protect all these guests and guests-of-guests.

In other words, the duty of care placed upon the hotel for its invitees extends to the hotel lobby, the elevators, the hallways, and the actual room area rented to the guest.

It is “stretching the doctrine of implied invitation beyond justifiable limits” to make the hotel’s duty of care extends to every single private or semi-public room of the hotel. There are boundaries.

When a hotel visitor crosses “the boundaries of the invitation,” then he or she stops being an invitee under the law.

The visitor who roams outside the invited areas (lobby, elevator, hallways, guest room), becomes a “licensee” and in some instances, may even be a “trespasser.”

However, when Essie and her friends, roamed into other areas,  she crossed the “boundaries  of the hotel’s invitation.”  Essie became a licensee as she roamed into the TV Room and the Movie Room.

As a licensee, the Cadillac Hotel owed her only the duty to refrain from willfully or wantonly injuring her. There was no evidence that her accident was willful or wanton, so the summary judgment was affirmed.