Are dog owners strictly liable for any damage done by their dogs?

According to Florida case law as of the date of this article, yes, a dog owner will be held strictly liable for any damage done to someone bitten by the owner’s dog.

Pandora the Great Dane and the Speeding Car

In Greenstein, a Great Dane name Pandora escaped from where she had been chained in the front yard of her owners’ home.  The owners, John and Pat Tomasetti, along with their son, Dane, went out in search of their lost dog.

Pat Tomasetti was driving through the neighborhood, looking for Pandora.  Melvin Greenstein was driving there, too.  It was dusk (around 7:15 pm).

As Mr. Greenstein was driving west down 60th Street, Pandora ran out into the street.

Mr. Greenstein testified that he turned the wheel so he would not hit Pandora and as a result, crashed his car into a power pole.

Melvin Greenstein demanded that Pandora’s owners take responsibility for the accident.  The Tomasettis refused to settle the claim with Mr. Greenstein.

So, Melvin Greenstein sued John and Pat Tomasetti for the damages he sustained in the car crash.  He alleged in his complaint that Pandora ran into the street and struck his car, causing him to lose control and hit the pole.

Before the case went to a jury for deliberations, Mr. Greenstein moved the trial judge to direct the jury to enter a verdict in his favor (“Motion for Directed Verdict”).

The judge granted the motion on the legal basis that under Florida Statute 767.01, the Tomasettis were “strictly liable” for Pandora’s actions.  The judge also ruled that how fast Mr. Greenstein was driving at the time was not the sole proximate cause of the accident.  The Tomasetti’s appealed the judge’s ruling.

On appeal, they argued that Florida Statute 767.01 did not apply.  They also argued that a jury might conclude that Mr. Greenstein’s speeding was the sole proximate cause of the accident, and that the doctrine of comparative negligence applied.

The appeals court held that Florida Statute 767.01 did apply to Pandora.  This was because Pandora the Great Dane did take some affirmative action that contributed to the crash:  the dog ran out into the street.  It was not aggressive action by the pup, but it was affirmative.

As far as Mr. Greenstein’s speeding, that did not matter.  Florida Statute 767.01 creates strict liability for the dog owner.  Florida dog owners are “cast virtually in the role of an insurer” under Florida law. 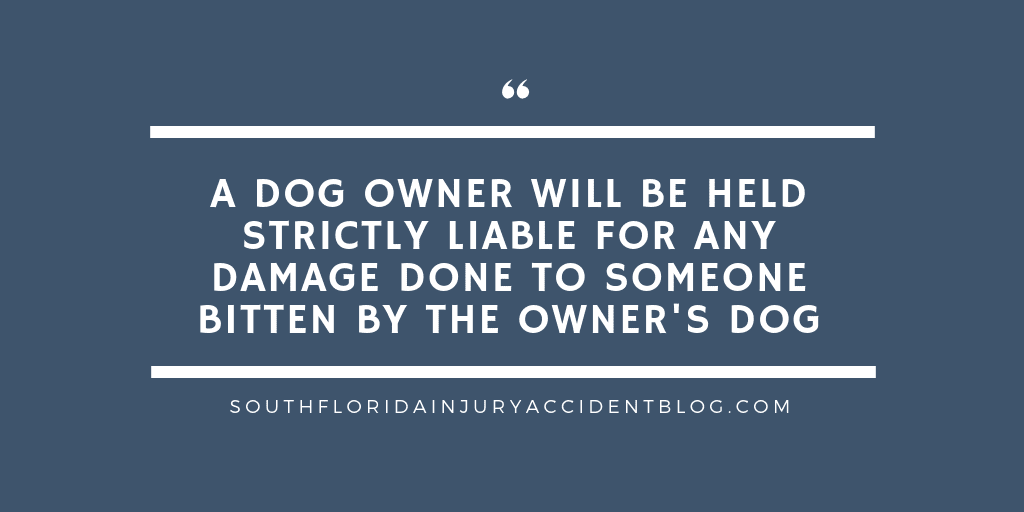 QUICK FACTS: According to Florida’s Statute of Limitations, you have 4 years from the date of the dog bite injury to file a lawsuit. However, if a death resulted from the bite, the deadline to file a lawsuit is 2 years.

The defenses available to dog owners are (1) assumption of the risk and (2) proximate causation are valid defenses under the statute.  These were not supported by the evidence, so the judgment of the trial judge was affirmed.