In Florida, most car accident cases do not go to trial simply because trials are expensive and time-consuming for both insurance companies and injury victims alike. Plus, trials carry with them the risks, including a jury award that is much lower or much higher than any good faith negotiated settlement.

While injury victims usually have to fight to have the defendant to pay their damages after a traffic accident, in the majority of cases the person injured in a car crash will not have to face the stressful experience of a full jury trial. If you have an injury claim resulting from an auto accident here in Florida, then the odds are that you will settle your claim with the negligent driver and his or her insurance company at some point before trial (even if it’s in the halls of the courthouse or after jury selection). This is true for around 90% of Florida car accident injury claims.

Is There A Prejudice Against Some Kinds of Car Accident Claims?

Insurance carriers and their defense attorneys measure a variety of factors in car accident cases and are prejudiced against certain types of accident claims. Some claims they perceive as being of little value or perhaps even being fraudulent. In these types of claims, they will approach the injured victim with skepticism regarding liability and damages; is the victim really hurt or are they hurt as bad as they claim?

Additionally, these victims may face an outright denial of their claim — or a very low settlement offer. The insurance company may say something like a settlement is being offered for “nuisance value,” or the amount that the insurance company is willing to pay to settle the claim because it would spend even more (on attorney’s fees, court costs, expert witnesses, etc.) than the offered amount to defend against the “nuisance” of the victim’s claim. 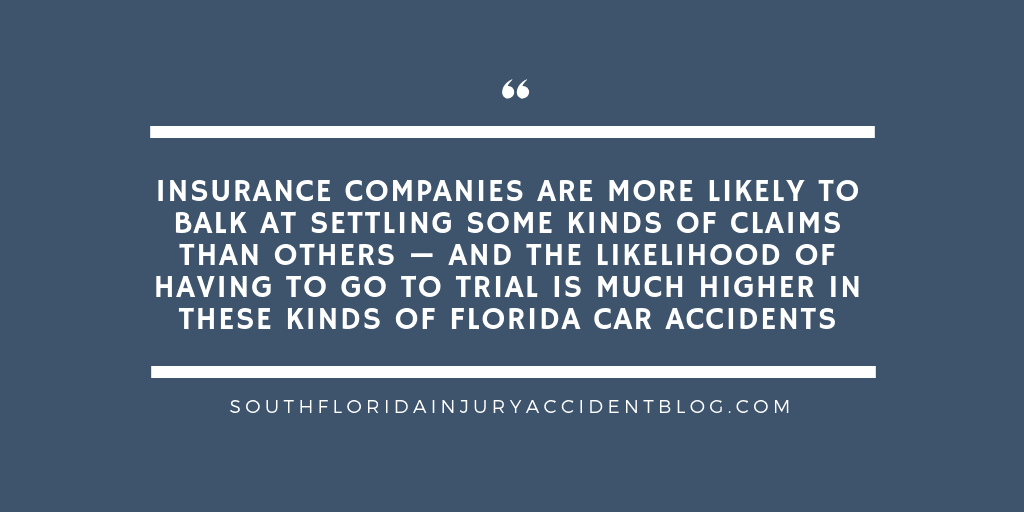 Fighting for Justice When Your Car Accident Claim is Denied

In these situations, it may be advisable for the accident victim to have an experienced car accident lawyer on their side to battle against the preconceptions of the defendant’s defense team in order to get the victim the justice he or she deserves.

It may be necessary to hire the correct experts to substantiate issues like fault by reconstructing the scene of the crash. Also, qualified investigators may need to be hired to find witnesses and to track down surveillance or red light video. Doctors may be asked to provide written opinions that the claimed injuries are serious and permanent, and not fake, and may require surgery or additional treatment in the future.

Read: What’s Your Case Worth?

What types of car accident claims are more likely to be challenged and denied by insurance companies here in Florida?

The 5 Most Likely Car Accident Lawsuits in Florida

In Florida, insurance companies analyze your injury claim and determine the “value” of your case. If your car accident claim doesn’t fit into their formulas, then they will refuse to increase their offer and settle with you and take their chances with a jury in a full courtroom trial. (Even if they risk losing big in a jury award.)

Based upon our experience in car accident lawsuits, these are the five types of car crash claims that are most likely to go to trial in Florida:

When one car crashes into the rear-end of another vehicle here in Florida, the person who is in the front car is highly likely to suffer spine and neck injuries. Whiplash and soft tissue injuries are common in rear-end collisions. Insurance companies are notorious for disputing the existence of these kinds of injuries, as well as their seriousness in terms of long-term injury, disability, pain and suffering, lost wages, etc.  The biggest issue in this type of car accident lawsuit relates to overcoming the presumption of fault.

When a car slams into a person on foot here in Florida, the insurance carrier and their team (lawyers, adjusters, etc…) often will point the finger at the injured victim who was hit by the car. They will assume that the pedestrian was at fault in the crash and not the driver of the vehicle because the victim breached its duty of care by not following the pedestrian safety statutes (he or she didn’t cross at a crosswalk or the victim didn’t obey traffic lights, stop signs, and street markings).

When one driver fails to yield right of way to another vehicle and causes a crash, there is often a question of liability and fault. Unless the injury victim’s lawyer can investigate and find witnesses, security cameras, or experts to reconstruct the crash and scientifically determine the failure to yield by the negligent driver, the insurance company will say it’s all finger-pointing and deny responsibility. Failure to yield car accident lawsuits often need a jury to decide between “he said, she said.”

Two cars crashing at an intersection bring up questions of assigning fault. Which driver had the right of way? Was one of the drivers making a left turn? Was there reckless driving involved? Insurance companies will try hard to deny that their insured was at fault in these situations, trying hard to argue that the victim was just as at fault as their insured in crashing in the middle of an intersection.

Broadside crashes happen when one car is T-boned by another car. This often happens when one driver is making a left turn at an intersection. At first glance, it would seem that the car which was broadsided would be the victim in the accident, but this is not always true, according to insurance companies and their lawyers. Once again, they will try hard to argue “fault” in the crash, particularly if there are no witnesses or videos to enlighten everyone involved on what happened to cause the crash.

A good piece of advice if you have been harmed in a car accident, is to speak with an experienced car accident lawyer before you file a claim to learn about some of the issues that can arise with these claims, including the type of evidence needed to prove a claim and the type and amount of damages you can recover. Most personal injury lawyers, like Alan Sackrin, will offer a free initial consultation (over the phone or in person) to answer your questions.