Car accident victims researching on the internet about car crashes in Florida find lots of articles about fault and how to determine responsibility when there are two or more drivers involved in a wreck. Most of these articles focus on the drivers and how insurance adjusters and defense lawyers  try to deflect blame from their client to the other driver.

However, often times there’s another party involved in these car accidents: the passenger. Can passengers seek damages from the driver of the car in which they were hurt? The answer is, it depends.

What is the duty of a driver to their passengers under Florida law?

Under Florida law, anyone who allows a person to ride in their vehicle as their guest (passenger) has a duty to that passenger to exercise ordinary and reasonable care in the operation of their vehicle and to keep that passenger safe. This has been the law of the State of Florida for almost 100 years. See, Carver v. Chase, 128 Fla. 287, 174 So. 408 (1937).  Thus, when a passenger is hurt in a Florida car accident, the passenger may be able to seek damages (lost wages, pain and suffering etc…) from their driver if the driver was negligent.

There are, however, defenses to this general rule.

Just like with any other injury claim, there are defenses to claims for negligence.  In most passenger injury cases, the driver’s first defense is usually that he or she was not negligent. The driver will simply claim that he or she did indeed act with reasonable care, and that the accident or injury happened for some other reason.

What are some other reasons why the accident occurred? Anything from another driver’s fault to the car’s faulty equipment, i.e. brakes or tires. Basically, any defense that is available in a car accident claim between two drivers is available in a passenger injury case.

Also, passengers can themselves be found to be negligent in a car accident.  If the judge or jury makes a  determination that the passenger’s actions were the main reason why they were injured, then the driver may not have to pay much for the passenger’s damages. Of course, in a situation like that, the passenger’s failure to exercise any ordinary care for his or her own safety is usually the reason why this decision is made.

Anyone who gets into a motor vehicle in Florida has a duty to exercise ordinary and reasonable care for their own safety.  Below are some examples of where a passenger may be found to be negligent in a traffic accident and therefore not awarded much in the way of damages from their driver:

1. If a passenger gets into a car and refuses to put on a seat belt and is injured in a crash, for instance, then the driver of that car may not be held responsible for the passenger’s harm.

2. If a passenger decides it’s okay to grab a ride in a vehicle that has no doors (like a jeep), and there is a crash where he or she is thrown from the vehicle and is injured.

4. Finally, if a passenger gets into a vehicle with someone they suspect may be driving while under the influence of alcohol or drugs, and there is an accident, then that passenger may have a hard time with their claim against the drunk driver. The argument will be made that both parties failed to exercise ordinary care.

The bottom line here is, that passenger injury claims are made all of the time but, because of the development of defenses to these cases, including the passenger’s own negligence, they are not open and shut cases.

1. Multiple Passengers In The Car Crash

Is Your Passenger Injury Claim Affected If There Are Multiple Passengers?

According to the Institute of Highway Safety, most of the people that die in a motor vehicle accidents are passengers; for example, in 2013 passengers represented 65% of that year’s 32,719 motor vehicle crash deaths.

The legal rights of a passenger to personal injury damages or a wrongful death claim are similar to that of an injured driver. The passenger needs to prove his or her damages resulted from someone failing to exercise ordinary and reasonable care in the operation of their vehicle.

If both drivers are at fault, then the passengers can file claims against both drivers. This can be important when there’s an issue of the how much insurance coverage that the driver carries for the car in which the passengers rode at the time of the crash.

Why? If the total amount of insurance coverage carried by their driver is not enough to cover their total damages, they may have to settle for less than what their case is worth — unless the other driver is liable to them for what has happened.

2. Passengers With A Teen Driver In An Accident

In Teen Driver Car Crashes, How Often are Passengers Killed?

According to the AAA Foundation for Traffic Safety, almost 75% of the people who are seriously hurt or killed in a crash involving a teen driver are passengers and people other than the teen behind the wheel. The Institute of Highway Safety explains that 69% of these deaths are people riding in the car with that teen driver.

Three mistakes by teen drivers cause most of their accidents: (1) they don’t look for road hazards; (2) they are speeding; or (3) they are distracted by something either inside the car or outside on the road. Most of the teen driver car crashes happen in the summer, too.

All too often, passengers contribute to these teen driver crashes by distracting the teen driver while they are driving.

3. Child Passengers In A Car Accident

How to Reduce Injuries To Child Passengers

According to the Centers for Disease Control and Prevention (CDC), motor vehicle accidents are the leading cause of death for children. Twenty percent (20%) of those child passengers died in cars where drunk driving was involved. Sadly, 65% of those fatal crashes had the driver of the child passenger’s car had a drunk driver and most of these child passengers were not properly buckled up at the time of the accident.

It is important not only to have children restrained in the car but to use those child restraint systems properly. Booster seats need to be properly installed and belted, for example; the CDC reports that one research study found that 72% of the observed child car and booster seats were being misused and placing the child in danger. 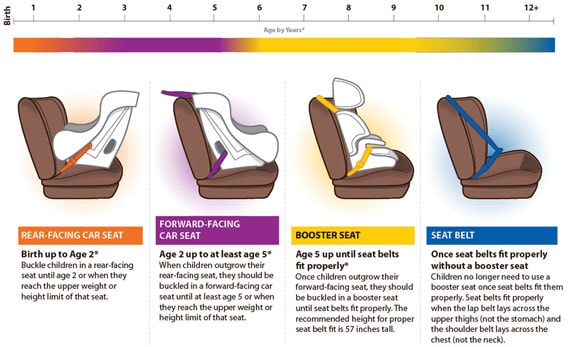 4. Uber Liability To Passengers In An Car Crash

What Is The Liability (Or Duty) Of Uber Or The Driver For An Injury To A Passenger?

Across the country, the revolution of Uber, Lift, and other “ride-hailing services” means that state lawmaker have been working hard to keep up with the new alternative to driving or calling a traditional cab company. One of those concerns is how to deal with an auto accident and who is liable for injuries to the passenger when there’s a crash involving a Uber driver (Uber, the driver, or both?).

In Florida, an Uber driver may be covered by their own personal auto insurance policy. However, that insurance carrier may deny coverage for the crash if a passenger was hurt while the driver was providing ride-hailing services. In other words, if the driver was doing business, then the personal policy may not cover any accident.

However, there are insurance policies available to these drivers, offered by companies like GEICO. But the Uber driver has to buy it and keep the policy in place. Otherwise, the passenger accident victim may have to sue the driver personally for damages (that he or she has to pay out of his or her own assets).

5. Taxi Cab Company Liability To Passengers In An Accident

What is the Liability (or duty) of A TaxiCab Company To A Passenger?

Taxi cabs companies are a form of “common carriers” under Florida law, like buses or trains. Florida Statute 324.032 requires the taxi cab company to keep a personal injury insurance policy to protect passengers in the event of a crash. Under the statute:

A person who is either the owner or a lessee required to maintain insurance under s. 627.733(1)(b) and who operates one or more taxicabs, limousines, jitneys, or any other for-hire passenger transportation vehicles may prove financial responsibility by furnishing satisfactory evidence of holding a motor vehicle liability policy, but with minimum limits of $125,000/250,000/50,000.

6. Passenger Location And Risk Of Serious Injury Or Death In Auto Accident

Does Passenger seating position effect the risk of passenger death or injury in traffic crashes?

Where you are sitting at the time of an accident can make a big difference in the extent of your injuries, and even whether or not you survive. According to the National Institute of Health, everyone who is a passenger in a motor vehicle is safer if they are sitting in the back seat, using the proper restraints (safety belt, car seat, booster seat, etc.).

From research done by the NIH, setting in the rear seat may lessen the risk of dying in a car crash by 39% as compared to a passenger sitting in the front seat.

A good piece of advice if you have been harmed as a passenger in a car accident, is to speak with an experienced personal injury lawyer before you file a claim to learn about some of the issues that can arise with these claims, including the type of evidence needed to prove a claim and the type and amount of damages you can recover. Most personal injury lawyers, like Alan Sackrin, will offer a free initial consultation (over the phone or in person) to answer your questions.