Aggravation of a Pre-Existing Condition

When someone is hurt in an accident, and they already suffer from physical problems, then the first thing that an experienced Florida personal injury attorney expects to hear from the defendant’s insurance carrier is that the defendant isn’t liable for the injuries because the injury relates to a “preexisting condition.”

While some may believe that is a logical response, that position isn’t always correct; in fact, there are times when a pre-existing condition or injury creates INCREASED liability for a defendant in a car crash or fall. How? In Florida, it is longstanding law that a defendant can be held legally liable for a victims overall condition if the victim has suffered an aggravation of a pre-existing condition. See, Atlantic Coast Line R. Co. v. Dees, 56 Fla. 127, 48 So. 28 (1908).

In other words, if a car crash or slip and fall made a pre-existing condition worse (or permanent), then the person who is responsible for the latest crash or fall will be held liable for making the condition worse as well as any direct damages (like a broken foot or ankle injury, for instance) that happened in the latest accident. As the Florida Supreme Court provides in its Standard Jury Instructions to be used by trial judges when they instruct Florida juries on the law:

“If you find that the defendant[s] caused a bodily injury, and that the injury resulted in [an aggravation of an existing disease or physical defect] [or] [activation of a latent disease or physical defect], you should attempt to determine what portion of (claimant’s) condition resulted from the [aggravation] [or] [activation]. If you can make that determination, then you should award only those damages resulting from the [aggravation] [or] [activation]. However, if you cannot make that determination, or if it cannot be said that the condition would have existed apart from the injury, then you should award damages for the entire condition suffered by (claimant).” 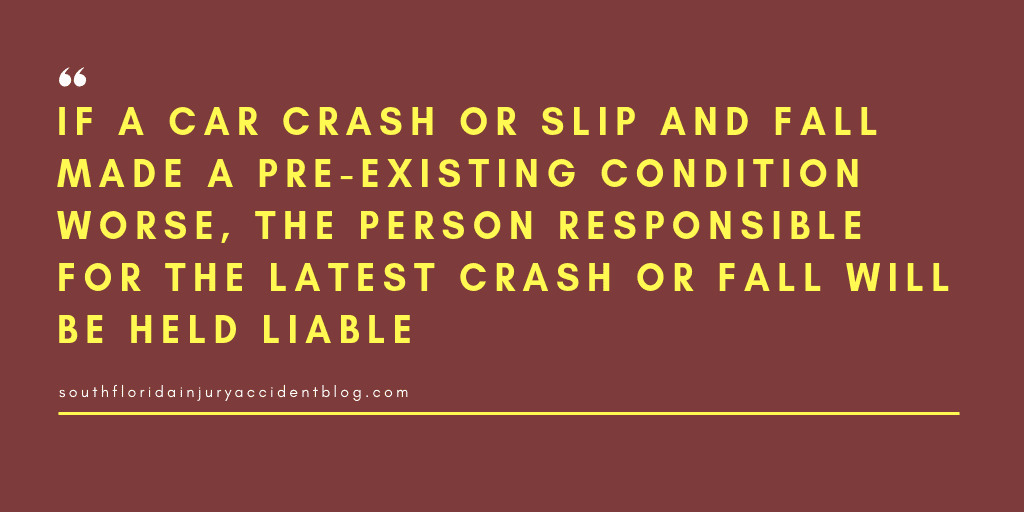 Is a Defendants Liable for Parkinson’s Disease Exacerbated By a Car Accident?

In the case of Hollie v. Radcliffe, 200 So. 2d 616 (Fla. Dist. Ct. App. 1967), there was a car crash at an Escambia County intersection where Roberta Brown’s car, driven by Willie Charles Hollie, collided with the car owned by James Radcliffe, which he was driving as his wife, Frances, sat beside him in the front seat.

Settlement of the Radcliffes’ resulting injury claim could not be reached, so a personal injury lawsuit was filed. The case went all the way to a jury verdict with the Radcliffes’ prevailing.  After which, the defendants filed an appeal, which they lost.

No one disputed that Mr. Hollie was at fault in the wreck. He admitted to running the stop sign, slamming into the driver’s side of the Radcliffe car.

In this case, the plaintiff’s “preexisting condition” was James Radcliffe’s Parkinson’s Disease, a disease he had suffered from for years.  His right hand been shaking for four years before the crash, which his doctor had diagnosed as a “Parkinsonian tremor.” Almost a year before the accident, Mr. Radcliffe had been forced from his job as a railway company clerk, taking an indefinite leave of absence, because his hand was shaking so badly that he couldn’t write.

After taking his leave of absence, Mr. Radcliffe was receiving regular medical care with a goal of getting better and returning to his job. Things were looking good: the month of the wreck, he was much improved. So much so, his doctor believed he would be ready to be tested by the company doctors in the next two weeks (the step required before going back to work).

Then the car accident happened. When his treating physician saw him a couple of days after the car accident, Mr. Radcliffe was in bad shape. He was “considerably upset” as he was “shaking much more than he had previously,” according to the doctor.

What Did The Court Say About The Aggravation of a Pre-Existing Condition?

After the jury rendered its verdict, the reviewing court (appellate court) determined that because the car accident aggravated the Parkinson’s disease of James Radcliffe, even though he had suffered from it long before the crash itself, those responsible for the automobile accident could be held legally responsible for his entire condition (and his need to take an indefinite leave of absence from work).

A good piece of advice if you or a loved one have been involved in an accident and your pre-existing condition has been aggravated, is to speak with an experienced personal injury lawyer before you file a claim to learn about some of the issues that can arise with these claims, including the type of evidence needed to prove a claim and the type and amount of damages you can recover. Most personal injury lawyers, like Alan Sackrin, will offer a free initial consultation (over the phone or in-person) to answer your questions.