Duty to Warn of Dangerous Conditions in Florida

In Florida, when someone is hurt in a slip and fall accident, the type of law that applies will depend upon the place where the victim got hurt.  Meaning, for example, if a victim gets hurt at a business establishment of some kind (like Walmart or other big-box store), then Florida’s premises liability law may apply.  These claims are so prevalent here, that the Florida Legislature passed specific statutes related to businesses and slip and fall claims.

The specific statutory law that applies to slip and fall victims hurt at a business location (when the accident is caused by a substance on the floor) is Florida Statute 768.0755, which is shown below.  Notice the highlighted language here:

Premises liability for transitory foreign substances in a business establishment.—

(a) The dangerous condition existed for such a length of time that, in the exercise of ordinary care, the business establishment should have known of the condition; or
(b) The condition occurred with regularity and was therefore foreseeable.

(2) This section does not affect any common-law duty of care owed by a person or entity in possession or control of the business premises.

We have discussed the importance of this statute to accident victims in Florida and how they have to prove their case in compliance with its language in several different posts. These include:

Today, we are delving into a different section of that statute and focusing on the phrase “dangerous condition.”

What Is A Dangerous Condition In A Florida Slip and Fall Accident?

The term “dangerous condition” has been defined through years of Florida case law. This term is so important that we think that accident victims need to understand what it means in everyday language. And, we think it’s equally important to be aware of the issues that spring from this language related to a Florida slip and fall, like:

Simply put, a dangerous condition is something that exists at a business location that might cause someone to get hurt.

Warning! What Duty Does A Business Have To Its Customers?

When a business owner knows about a dangerous condition on their business premises, something that might cause someone to slip and fall, then that business has a duty to warn of that danger. Under the law, the business has a duty, for example, to use a wet floor sign or warning tape. That’s a responsibility that a business has when they open their doors to people and invite them inside the premises.

When Wont A Business Be Held Liable?

However, that duty isn’t without its limits. Under Florida law, if a business takes reasonable steps to protect its customers, visitors or other invitees, then it will not be held liable if the invitee gets hurt while on the business owner’s premises. For example:

A worker at a citrus processing plant was killed when he cut into a tank filled with explosive chemicals. The plant owner warned everyone about the dangers of the tanks, which no one disputed. The court determined that the owner had taken steps to tell all the project sub-contractors, independent contractors, etc., that working with the tanks was dangerous. As a result, the plant owner was held to have fulfilled its duty to warn of the risk and wasn’t liable for the death. Indian River Foods Inc. v. Braswell, 660 So. 2d 1093 (Fla. Dist. Ct. App. 4th Dist. 1995).

2. The Accident Victim Is Aware Of The Danger.

Here, for example, a Florida Hotel does not have a duty to warn swimmers of the natural dangers of swimming in the Atlantic Ocean, even if they were hidden from view, as long as the hotel business hasn’t blocked off that section of the beach or assumed a particular responsibility for it as part of offerings to its guests. Poleyeff v. Seville Beach Hotel Corp., 782 So. 2d 422 (Fla. Dist. Ct. App. 3d Dist. 2001)

3. The Condition Is Determined Not To Be Dangerous.

For instance, in K.G. By and Through Grajeda v. Winter Springs Community Evangelical Congregational Church, 509 So. 2d 384 (Fla. Dist. Ct. App. 5th Dist. 1987), the court ruled that a brick border surrounding a tree is not a dangerous condition meriting a duty to warn folk of the risk of injury. 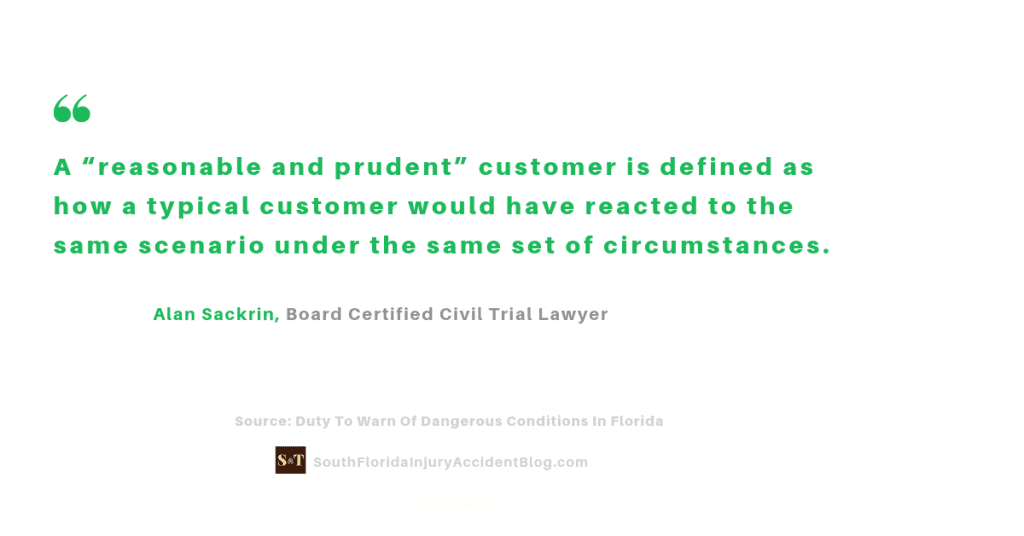 Duty to Warn About Hidden Conditions That Cannot Be Seen

What kind of hidden condition creates a duty on a business to warn its customers while they are on the business owner’s premises? Answer: A hidden condition that a business owner knew about, or should have known about, and which is not known to the invitee. Stated another way, it’s a condition that a reasonable customer or business invitee wouldn’t know about as he or she is spending time at a hotel, restaurant, or grocery store.

What is a reasonable customer or invitee?

A “reasonable and prudent” customer is defined as how a typical customer would have reacted to the same scenario under the same set of circumstances. If a reasonable customer wouldn’t be able to see a dangerous hidden condition, or otherwise have some idea that there was an immediate risk of harm, then it’s a hidden condition that a business owner is obligated to warn about to its invitees.

The Case of the Slick, Soapy Stuff at the Service Station: a Hidden Danger

An example of a hidden condition that caused a slip and fall accident happened in Simpson v. Simpson, 232 So. 2d 249 (Fla. Dist. Ct. App. 1970). There, William Simpson pulled into a Florida service station for gas. After filing his gas tank, he was replacing the pump nozzle when “both his feet slipped out from under him” and he fell flat on the concrete surface, hitting his head on the gas pump island curb.

At the time that he was injured, the concrete area where the gas pumps were located was wet. That was easy enough to see. However, this wasn’t just water sprayed on the concrete to clean it. This wet surface was caused by a soapy solution that had made its way to the gas pump area from where the service station employees were washing cars.

It was held by the court that the soap solution had made the water “slick and slippery” and that this was dangerous — but it was hidden. It was “not visible” to the accident victim, who slipped and fell on the slippery, soapy water. The service station had a duty to warn its customers about the slick soapy stuff.

No Duty to Warn About Obvious and Easily Seen Conditions

Normally, there is no duty to warn of obvious and apparent dangers. If the danger is plain to see by everyone, then the business has no special duty to warn its customers about it. The law assumes that the customer can understand the risk of getting hurt because the danger is right there in front of them.

This is called an “open and obvious condition” in legal terms. An example? In Kagan v. Eisenstadt, 98 So. 2d 370, 372 (Fla. 3d DCA 1957), it was an open and obvious danger with no duty to warn by the property owner when an experienced lumber salesman fell on an open stairwell in a multi-level home that was being built, since it is an obvious danger he would understand as a part of his job that a partially constructed stairwell was obviously dangerous.

Contributory Negligence Defense in an Open and Obvious Dangerous Condition

Simply put, if someone gets hurt in a slip and fall involving an open and obvious dangerous condition, then they can expect the business to point the finger at them.

The Case of the Hump in the Store’s Floor Mat: An Open and Obvious Danger

It seems that Paulette and Linden Haymer were buying groceries at their local Bravo grocery store. When they entered the store, they didn’t notice if there was a mat on the floor or not.  However, they did know that a floor mat was usually there.  When they finished buying their stuff, Mr. Haymer pushed their cart out the door and had to wait for the store employee to lay down the floor mat right outside the front door.  He noticed that it wasn’t flat on the ground, but “humped.” He stepped over the humps and went on his way.

Mrs. Haymer came out of the store a little later.  She had a bag with two soda bottles in it.  She tripped on the store’s mat and fell down.  Her claim was denied so she sued for injury damages.  The Bravo defense was that it was an open and obvious danger and they weren’t liable.

There was testimony that an employee had laid down the mat and failed to make sure it was totally flat on the floor. There was also testimony before the court that the floor mat was placed in the single entrance to the store.  The clientele had no choice but to walk over that floor mat in order to enter or exit the store.

The Florida court held that the “hump” in the floor mat was an open and obvious dangerous condition. The case was returned to the jury (unless the parties could settle) for the determination of contributory negligence of the accident victim, Mrs. Haymer, for tripping and falling over the hump in the floor mat.

Note:  For more information on slip and fall accidents involving the LACK of floor mats and how to prove those kinds of cases, see our earlier post, “I Slipped And Fell On A Wet Restaurant Floor – It Was Raining, No Floor Mat: Do I Have A Case?”

If you have been hurt in a slip and fall accident on business property, then it’s important to gather as much evidence as soon as possible after the accident to preserve your rights. That can include getting witness testimony and directing the business owner, in writing, to preserve any video footage that may show the accident. In most situations, you can expect to find an uncooperative business owner who will claim that the accident was your fault, or that they had no duty to warn you that a dangerous condition was present.

A good piece of advice if you have been harmed by a slip and fall under these circumstances, is to speak with an experienced personal injury lawyer before you file a claim to learn about some of the issues that can arise with these claims, including the type of evidence needed to prove a claim and the type and amount of damages you can recover. Most personal injury lawyers, like Alan Sackrin, will offer a free initial consultation (over the phone or in person, whichever you prefer) to answer your questions.

What do you need to prove in a Florida slip and fall under Florida’s premises liability law?

If you found this information helpful, please share this article and bookmark it for your future reference.
(Visited 893 times, 1 visits today)