In the context of personal injury law, a herniated disk, or slipped disc, occurs when there is trauma and injury to a disk in an accident victim’s spinal column.  They are known to occur in “minor” car accidents like slow speed rear-end collisions and in grocery store slip and falls.

These disks are located between the bones of the spine (vertebrae) and they act as a protective cushion when the spine moves.

A healthy disc acts as a round, flat “shock absorber” for the bones in the spine.  The discs are formed by an outer layer called the annulus, which is filled with a jelly-like material known as the nucleus.

As mentioned, it doesn’t necessarily take a great force to harm a spinal disc. In fact, a slipped disc can occur when a disc is pushed slightly.  Many times it can even rupture, allowing some of its cushioning nucleus to escape the disk.  This is known as a “ruptured disk.”

What are the Symptoms of a Herniated Disk?

Herniated disks can range in severity.  Some will irritate spinal cord nerves, which can be very painful and can be life-altering.  Others can block the nervous system transmissions to the brain, causing numbness in an arm, hand, leg, or foot.  Sometimes, herniated disks can even exist without any resulting symptoms.

When a medical provider is considering an accident victim’s injuries and the possibility of a herniated disk injury, he or she will consider the following signs & symptoms (as described by the Mayo Clinic):

The severity of the injury depends on whether or not the nerves of the spinal column are involved. For example, if the herniated disc is putting pressure on a nerve, then there may be pain,  numbness, or weakness in the use of a hand or foot.

A specific type of pain known as Sciatica can result from a herniated disc. Here, the victim will suffer from pain, burning, or numbness from their buttocks down their leg and into their foot.  This will usually impact only one side of the body. 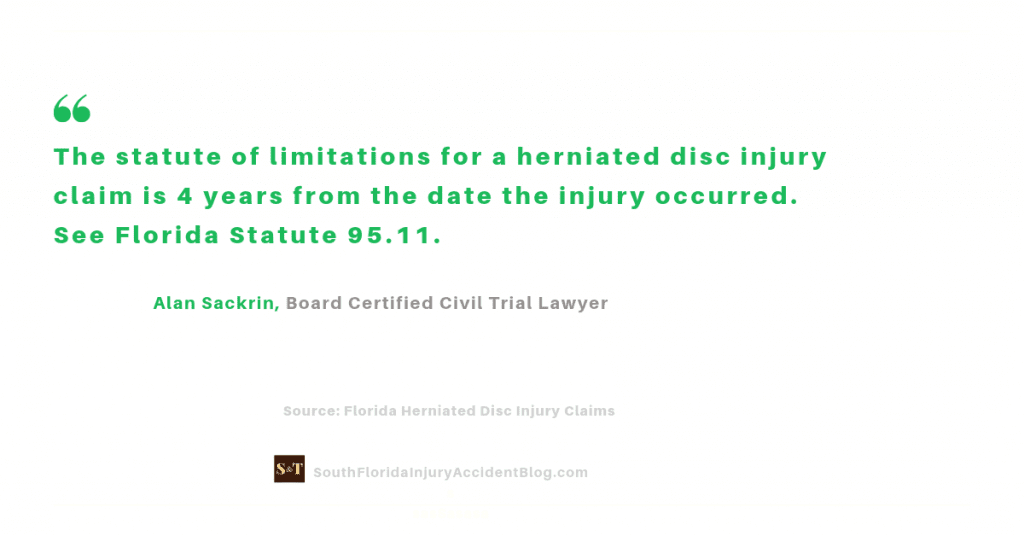 Treatment for Victims of a Herniated Disk

For accident victims who suffer from a herniated disk, there are a variety of remedies to ease their discomfort and resolve their injuries.  These include:

There are a variety of surgeries that may be required to resolve a herniated disk.  These include:

Every accident victim who suffers a herniated disk should know that the at-fault party is liable to compensate the victim for their damages, which can include the victim’s pain and suffering, present and future medical expenses, lost wages and other economic and non-economic losses.

However, the injured victim must be proactive. A claim for damages has to be timely filed with the person(s) responsible for the accident (or their insurance company).

As with all personal injury claims, there is a time deadline for filing a claim for damages in Florida.  The statute of limitations states that the deadline is 4 years from the date the herniated disc injury happened.  Florida Statute 95.11.

If you don’t file the claim by this date, then it is “time-barred” and you cannot pursue the claim through court intervention.

For more, watch: “How do statute of limitations work?”

The victim of a herniated disc will have to prove his or her damages, in addition to proving the defendant’s liability for the accident.

Watch: Can an injury victim recover damages if they don’t have surgery?

Case of the Slip and Fall Herniated Disk Back Injury

Sometime after his fall, he sought medical treatment and was told that he would suffer from back pain for the remainder of his life.  Unfortunately, Mr. Ramey did not have insurance coverage (treatment of a herniated disc can be costly) which is why he delayed seeking medical treatment.

At trial, both the general practitioner and the neurosurgeon provided testimony that his fall at the grocery store caused a herniated disc.  They also joined in his prognosis and stated that the slip and fall accident resulted in permanent harm to Mr. Ramey.

As a result, he would need periodic medical care for this spinal injury for the rest of his life. Meaning, his pain and suffering was permanent.

Winn-Dixie did not dispute this medical testimony.  Moreover, the grocery store did not provide evidence that the injury wasn’t permanent, nor did they refute that the back pain existed and would need treatment for the rest of Mr. Ramey’s life.

They argued against Mr. Ramey being compensated solely because he delayed getting medical treatment.  They defended this by arguing that mysteriously, the passage of time had impacted his injury and increased its severity.

This was disproved by the victim’s medical experts.  Mr. Ramey’s doctor explained that since Mr. Ramey had no medical insurance, and no surplus funds, he was forced to get treatment when and how best he could do so.

Winn Dixie failed to provide any medical evidence that Mr. Ramey’s herniated disc was exacerbated by the delay in getting treatment.   The defense’s argument that he should be denied damages for his herniated disk failed.

If an accident victim cannot satisfactorily resolve their claim for herniated disk damages, then a lawsuit is the only real option to get justice from the person(s) responsible for the accident.   See, “3 Reasons Why an Injury Claim Becomes a Lawsuit.”

In Florida, most personal injury lawsuits settle before going to trial.  However, some injury claims will go to trial which can take years to conclude.

Case of the Doctor’s Rear-End Collision and Herniated Disk: The Expert Fight

This is particularly true when experts question the cause of a spinal injury.

For instance, consider the case of Nathanson v. Houss, 717 So. 2d 114 (Fla. Dist. Ct. App. 1998), Here, Dr. Houss was involved in a rear-end collision.  The accident was considered a minor crash, with the cars traveling at a very slow speed.

Dr. Houss was stopped in a right-hand turn lane.  The defendant was also stopped in the same lane and admitted that he allowed the front of his car to collide with the rear of Dr. Houss’ car.

The doctor was hurt in the accident and suffered a back injury.  It was determined that Dr. Houss’s herniated disk was caused by the rear-end accident.

No one disputed that the driver of the rear car was at fault.  However, there was a huge controversy over the injuries sustained by Dr. Houss.

This was confirmed by medical tests and various medical experts.  These medical experts diagnosed and treated him, and also provided testimony at trial.

Regardless of the scoffing of the adjusters and the defense lawyers, Dr. Houss was seriously hurt.  So much so, that preliminary treatment was unsuccessful.  He had to have surgery on his spinal cord.

However, the defense team refused to respect the doctor’s claim even after he was forced to have surgery in order to alleviate his pain and restore his mobility.

First, they argued that he had suffered from a preexisting condition: a degenerative disk.

They also argued that even if it was a herniated disk, that can be caused by everyday activities and not necessarily from the rear-end collision.

They brought forward several medical experts to refute the experts testifying for the victim.  These included an orthopedic surgeon; a neurosurgeon; and a radiologist.  It became a fight between the experts.

Nevertheless, Dr. Houss won his case.  It was found that the evidence he presented supported a reasonable conclusion that the herniated disk existed and that it was caused by the car accident.

Here are a few of our recent settlements:

$45,000.00 Settlement – Defendant failed to observe surrounding traffic conditions while traveling at an excessive speed causing a rear-end collision. Plaintiff sustained injuries to the cervical spine, protruding herniation causing stenosis of the anterior flattening of the ventral cord. The Plaintiff had prior accidents and pre-existing degenerative changes in the spine.

$80,000.00 Settlement – Defendant was in operation of a vehicle owned when he backed out of a parking spot and collided with Plaintiff. Plaintiff suffered a cervical disc disruption at C3-4. Plaintiff had surgery but she represented to the insurance company that she didn’t have prior neck issues even though she sought treatment, and an MRI, for a prior neck issue and complained for years about having neck pain.

$60,000.00 Settlement – Defendant was driving her vehicle and failed to reduce speeds causing Defendant to collide with Plaintiff’s vehicle. Plaintiff suffered from L5-S1 posterior lateral disc herniation w/ compression on the thecal sac, bulging annulus at C5-C6 w/ compression of the thecal sac. Plaintiff’s disc was not herniated and he had pre-existing back and neck conditions.

If you have back pain after a slip and fall accident or a car crash in Florida, then you may be suffering from a herniated disk caused by your accident.  If so, then those who caused that accident may be liable to you for your damages.

This is true regardless of the resistance you may have received from their insurance adjuster.  Claims adjusters are notorious for discounting spinal disk injuries, particularly when they are the result of a minor accident such as a rear-end collision or a slip and fall.

If your doctor believes that you have sustained a back injury, then you need to take steps to protect your legal rights and to assert your claim for damages against those who are responsible for your injury.

A good piece of advice if you have been injured in a car accident or in a slip and fall and have a herniated disc, is to speak with an experienced personal injury lawyer who has spent years evaluating car accident facts, applying the law, and effectively asking juries to render a favorable verdict. Most personal injury lawyers who meet these criteria, like Alan Sackrin, will offer a free initial consultation (over the phone or in-person) to answer your questions.

For more information, check out:

Can Age Affect Settlement Of A Personal Injury Claim?

Do You Have An Injury Claim If You Delayed Medical Treatment?