Do Owners Of Private Property Owe A Duty To Motorists On Adjacent Roads?

What happens if foliage or trees create a condition, like a blind spot, which results in a traffic accident?

All too often, Florida car accidents are caused by the sudden mistake of a single driver. However, negligent drivers rarely admit the accident was their fault and usually blame someone else or some condition that was beyond their control.

In some instances, an at-fault driver’s finger-pointing at a third party may be justified because a third party, like a private property owner, may share the financial responsibility for an car accident victim’s damages. This can happen where a property owner fails to maintain their trees and foliage which can spill over and create a blind spot to drivers on the road.

In these situations, both the third party and the at-fault driver will bear a share, in varying degrees, of responsibility as the proximate cause of the car accident. Meaning, each will have to pay their percentage of a victim’s damages like medical expenses, pain and suffering, lost wages, etc. because it was foreseeable that the condition on their property could cause or contribute to a car accident. How much the driver pays and how much the third party must cover in the damage claims will depend upon each party’s determined level of fault (in a car accident lawsuit, this determination is made by the jury).

The key issues here are causation and foreseeability. Is it foreseeable that the condition (the trees and foliage) on the owner’s property could cause a car accident? 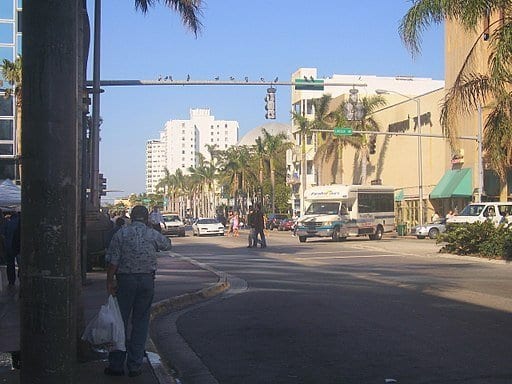 Intersection of Washington and Lincoln Streets in Miami Beach, Florida

A property owner can be held liable for a traffic accident if their landscaping and foliage creates a blind spot, or otherwise blocks the drivers’ view of the roadway. The argument is based upon the theory that the landscaping in some way interfered with the motorist’s ability to drive safely along the roadway and that it was foreseeable that the condition could cause a traffic accident. In these situations, the law imposes a duty upon a property owner to make sure that their landscaping does not create a dangerous condition for motorists that travel alongside their property.

However, not every piece of foliage or tree can be the proximate cause or the blame for a traffic accident. Thus, each accident scene is different, and each scene must be analyzed independently to determine if an adjacent property owner bears any responsibility or if any duty has been breached.

Read: Can fault in an automobile accident claim be shared between parties?

Under the “foreseeable zone of risk analysis” every car accident which occurs near private property should include an investigation of the landscaping that surrounds the scene of the car accident. A plaintiffs’ personal injury attorney will want to know:

These questions are useful because they help determine whether or not the foliage or tree branches were the proximate cause of the car accident. Meaning, these questions will essentially answer some key factors such as:

As a general rule under Florida law, private property owners are not under a legal duty to motorists on abutting roadways. Home owners can grow and maintain the greenery and foliage on their land as they desire. However, when their trees, shrubs, bushes, and plants extend past the boundary of their lot or acreage, things can change.

For example, the Florida Supreme Court has held that all Florida property owners owe a legal duty to drivers not to have foliage growing past the bounds of their property and into the public right-of-way, to avoid interfering with a motorist’s ability to travel safely on the adjacent roadway. Williams v. Davis, 974 So. 2d 1052 (Fla. 2007).

In that case, Beverly Williams owned a home in Orlando that sat next to the intersection of Sidney Hayes Road and Pine Street. She had plenty of greenery and foliage in her front yard. Sadly, a woman named Twanda Green was on the job, driving a rental car from one rental car lot location to another. She was in a caravan of rental cars, fifth in a row of six vehicles. They were moving west on Pine, where there was a yield sign at the “T” intersection with Sidney Hayes.

As Twanda Green turned left from Pine onto Sidney Hayes, she was hit by a dump truck and later died as a result of the accident.

The Personal Representative of Twanda Green’s estate sued the dump truck driver, among others, as well as residential property owner Beverly Williams. She argued that the home owner was liable for damages because her landscaping had created a blind spot that blocked Ms. Green’s view of the approaching dump truck. In other words, she argued that if the greenery had not been there, or if it had been trimmed back, then Ms. Green would still be alive today.

The court held that Beverly Williams owed Twanda Green a duty of care to maintain the foliage on the property so as not to restrict the visibility of motorists at the intersection. As the Florida Supreme Court explained, home owners must not permit conditions on their land that create a hazard for traffic on adjacent roads. “Because of the great reliance on automobiles, the higher population density in today’s society, and the critical importance of highway safety, all citizens must share the responsibility to assure public safety.”

The same duty for maintaining foliage on private property in Florida applies to commercial property as well as residential property. In fact, business owners have been held responsible for car accidents caused by their foliage and landscaping which have caused “blind spots” on adjacent roadways several years before a duty was applied to residential property owners.

Florida commercial property owners have been liable for traffic accidents caused by their foliage since 2001. In Whitt v. Silverman, 788 So.2d 210 (Fla.2001), a property owner unsuccessfully argued that because the car accident was not on their land, that they could not be liable for the victim’s damages.

Their argument was based upon the “agrarian rule” which says a landowner is never responsible for anything that happens outside his property line, even if his foliage can be a contributing cause of an accident. See, Restatement (Second) of Torts § 363(1) (1965).

The Florida Supreme Court held this rule was unjust. Applying that strict, absolute no-liability rule was not right when considering urban landowners and modern motorists (as well as pedestrians). So the Court chose to use the “foreseeability zone of risk analysis” instead. Whitt, 788 So.2d at 213.

The court held that if the land owner has created a foreseeable zone of risk by the foliage that poses “a general threat of harm” toward (1) the patrons of the business as well as (2) those pedestrians and (3) motorists using the abutting streets and sidewalks, then a landowner can be liable for damages caused by a crash. Whitt, 788 So.2d at 222.

The Case of the Florida Service Station’s Overgrown Landscaping

In Whitt v. Silverman, the accident happened when a Florida woman named Jean Simoneau stopped at an Amoco service station in Miami Beach for a fill-up. As she was leaving the gas station, she was in a serious car accident. Ms. Simoneau collided with two pedestrians, one died from her injuries and the other person was seriously injured.

Afterwards, the pedestrians filed personal injury claims against Ms. Simoneau as well as the owners of the Amoco Service Station. They argued that the gas station had a large “stand of foliage” growing between the station and the property next door. The foliage blocked the view of drivers and impaired the driver’s ability to see the sidewalk. Because of this greenery, Ms. Simoneau couldn’t clearly see the pedestrians and this condition was the proximate cause of the accident. Therefore, Amoco should be held liable for their damages.

Amoco argued it was not liable for the car accident because the accident didn’t occur on its property or premises. The crash happened on the adjacent roadway, not on the gas station lot.

The Florida Supreme Court considered how things had changed in society since that rule of no liability had been created. Looking to other courts, the court held that Amoco was relying on old law but that “modern conditions” and “prevailing negligence law” would not allow Amoco to escape liability for conditions on its property that were partly to blame, or the proximate cause, of car accident.

Legally, the service station owner had a duty of care to the pedestrians. When they were injured on the adjacent roadway it was due, in part, to Amoco’s foliage obscuring the at-fault driver’s view. Amoco could reasonably foresee that risk. From the court:

“…the landowners’ conduct here created a foreseeable zone of risk posing a general threat of harm toward the patrons of the business as well as those pedestrians and motorists using the abutting streets and sidewalks that would reasonably be affected by the traffic flow of the business. Notwithstanding this conclusion, of course, cases like this must be subjected to a factual determination of whether the landowners actually breached their duty under the particular circumstances and whether the accidental death or injury was a proximate result of any breach of that duty. In other words, although we conclude that the landowners had a duty of care, a discrete factual analysis and determination is required to determine the landowners’ alleged responsibility in each case.”

Gas stations have lots of traffic moving on and off of their commercial property. Since Amoco had exclusive control over its landscaping on its property, it was not asking too much of Amoco to keep the foliage maintained so it allowed safe egress and ingress of motor vehicles into the service station. Amoco had a duty, which it likely breached, to protect those on or off the property that could be reasonably harmed by conditions on their property.

Investigating each auto accident site and determining if there are others beside the driver who share responsibility for the victim’s damage is important. No two accidents are the same.

An experienced Florida auto accident attorney who has spent much of his career dealing with car accident insurance adjusters and negotiating car accident claims understands each victim’s accident is unique and causation and foreseeability must be must be properly argued and proven to the trier of fact.

A good piece of advice if you or a loved one are hurt or killed in a car accident is to speak with an experienced personal injury lawyer to learn about some of the issues that can arise with these claims, including the type of evidence needed to prove a claim and knowing how most car insurance companies respond to these claims. Most car accident lawyers, like Alan Sackrin, will offer a free initial consultation (over the phone or in person, whichever you prefer) to answer your questions.