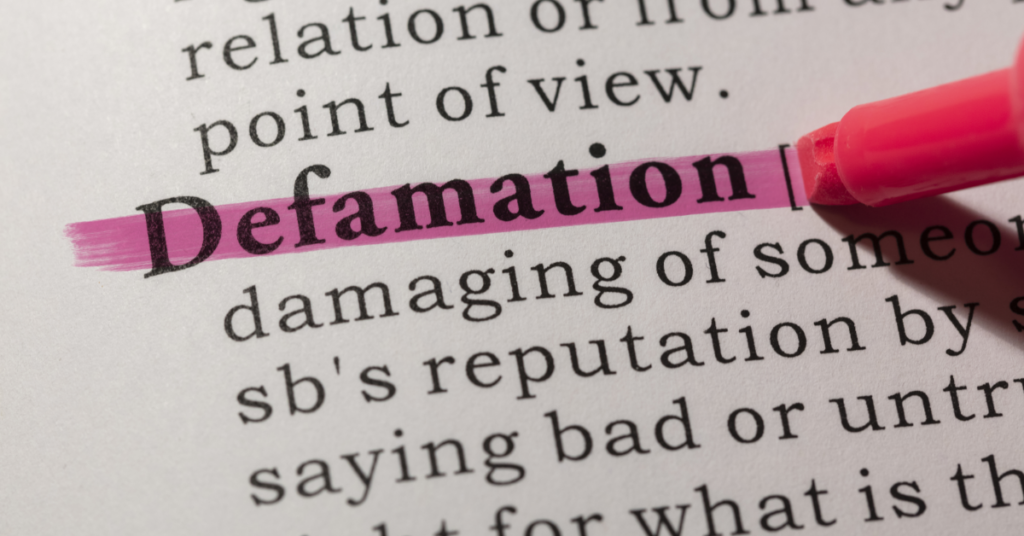 Defamatory statements against attorneys, medical providers, and other service professionals

Perception is reality. In the eyes of a prospective client, a defaming Google review or negative Facebook comment holds more water than anything you can do or say to prove your integrity or the quality of your service.

Professional service providers have felt the whiplash of one day being viewed as a respected doctor, lawyer, or executive only to then be attacked online by a past client.

A client who types and posts angry comments in the heat of the moment can produce a ripple effect of consequences through your business, damaging not only your livelihood but your reputation. Once your character has been called into question, it’s hard to recover.

Fortunately, you have the power to fight back.  A defamation lawsuit is one tool you can use to recover the damage to your reputation.

What Does Florida Law Say About Defamation Against Professional Service Providers?

In the eyes of the Florida court, a negative review is not necessarily a defamatory statement.

A negative online review implying or directly accusing a professional of dishonesty or fraud within their profession is libelous and is perhaps the clearest form of defamation.

Also, a published statement may be defamatory if it threatens the credibility or questions the character of a service professional in a way that’s incompatible with the way that a professional exercises his or his business.

For example, a negative Google review may be considered libelous, or defamatory, if the review were to question the competency of a heart surgeon to perform a particular cardiovascular procedure. That’s because the review calls into question that surgeon’s ability to perform their job and do it competently.

If, however, that Google review were a complaint about the long wait time a patient experienced while waiting for surgery, that statement – while negative – isn’t considered defamatory because the wait time is not directly related to the surgeon’s ability to properly perform a medical procedure.

Other types of defamation against service professionals involve statements implying a lack of mental fitness. Suggesting that someone suffers from a mental affliction that inhibits their ability to do their job effectively could defame their reputation and make it difficult, if not impossible, for them to continue to serve in their role or maintain their business.

For example, in Eastern Air Lines, Inc. v. Gellert, 438 So. 2d 923, an Eastern Air Lines pilot, Daniel G. Gellert, made written and verbal allegations that he had been penalized by Eastern for public statements disclosing an alleged defect in the design of the L-1011 passenger plan in use by the airline. When asked about Gellert’s statements in an interview with the London Sunday Times, James Ashlock, director of Eastern Air Lines’ new bureau, was quoted as saying:

“Gellert has been complaining for years. I think you ought to know that he wrote some very odd letters to the FBI… . He said Eastern was out to get him, that we tried to crash a plane in order to kill him. He’s paranoid.”

He went on to say:

“It’s awfully hard to fire anyone these days. Anyway, we have three of them in the cockpit. Know what I mean?”

The court disagreed, stating that because Ashlock’s full statement, while an opinion, was based on facts. The first part of his statement implied that Gellert suffered from a mental affliction – paranoia. The second half of his statement implied that Gellert was unfit to serve in his role as a pilot and carry out his professional responsibilities due to his mental affliction. As a result, Ashlock’s full statement is slanderous per se.

The court found Eastern Air Lines, through its agent Ashlock, did make defamatory statements about Gellert that caused damage to his professional reputation. Meaning, Eastern will have to compensate Geller for his damages.

We’ve seen more and more defamatory statements targeting attorneys in Florida in recent years. Usually, the statements come from the angry spouse of a client in a dissolution of marriage case or a client who didn’t get their way. In most of the attorney defamation cases we see, the defamatory statement is made by someone unhappy with the result of a case, not from a client who suffered from an attorney’s incompetency or unfair treatment.

Negative reviews of an attorney or other professional are considered defamatory when they suggest the professional operated with a lack of character, a disregard for professional ethics, or suggests the attorney took part in unprofessional behavior.

In Blake v. Giustibelli, 182 So. 3d 881 (Fla. 4th DCA 2016), the character of attorney Ann-Marie Giustibelli was called into question. Giustibelli received a harsh, negative review by a client, Copia Blake, after the client’s dissolution of marriage case. The relationship between the client and attorney broke down and dissolved, and the client posted defamatory reviews of Giustibelli as a result. The former client accused Giustibelli of lying and of deceitful behavior, claiming she excessively billed Blake for more time than was necessary to support the case.

Giustibelli filed a lawsuit suit claiming that the negative reviews from her former client were defamatory. She presented evidence that showed that the client had agreed to pay her hourly retainer in a written agreement.  The judge ultimately ruled in her favor, awarding her damages due to the libelous statements and breach of contract.

Blake appealed saying that the review was a statement of opinion and, therefore, not actionable. The court disagreed because Blake’s review put forward false information that exposed Giustibelli to possible distrust, hatred, contempt, ridicule, or obloquy which would impact her professional reputation and ability to secure future client work.

Not All Reviews are Considered Libelous

There are also cases where a review, however negative, does not reflect on the character or integrity of the professional and, instead, was made due to hatred, distrust, ridicule, contempt, or disgrace.

For example, in Rubinson v Rubinson, 474 F. Supp. 3d 1270 (S.D. Fla. 2020) a father sent emails to businesspeople accusing his son, an attorney, of taking money from him even though the father had spent all his retirement savings paying for the medical treatment required to save the son’s deceased mother who was fighting cancer.

While the written statements were damaging to the son on a personal level, the emails were not considered defamatory by the court because they did not question the son’s moral character or conduct as directly related or relevant to the son’s profession as an attorney.

What Should You Do if You Receive a Negative Online Review?

If you’re a professional services provider who wakes up to find a negative online review of you or your business, then you should examine the review objectively.

Does the negative review call your professional reputation or competency into question? This is the minimum threshold to overcome when determining if you have an actionable claim.

If you believe the review is libelous and you’re concerned about your professional reputation, many times the fastest way to resolve the issue is to ask the reviewer to remove or revise the statement.

If, however, the relationship is contentious and the reviewer refuses to take down the statement, then it may be time to engage a Florida defamation attorney. Your attorney can file a defamation lawsuit to force the removal of the statement(s) and recover your damages.

Most defamation attorneys, like Alan Sackrin, will offer a free initial consultation (over the phone or in-person) to answer your questions. When you’re ready to speak with a defamation lawyer about your case, give Alan a call at 945-458-8655.