What is Defamation in Florida?

In Florida, defamation is defined as the unprivileged publication of false statements which naturally and proximately result in injury to another. Hoch v. Loren, 273 So.3d 56 (2019)

Together, “libel” and “slander” make up what is commonly known as defamation of character. And, committing one of these acts in Florida can be the basis of a civil lawsuit and the recovery of damages.

Meaning, that someone can sue for defamation of character and force a bad actor to compensate the victim for the harm they have caused to a person’s personal and/or business reputation.

What Are The Elements Of A Florida Defamation Of Character Claim?

To prove defamation of character in Florida, a victim must provide admissible evidence of four elements (these elements apply to both libel and slander claims).

The four elements are: 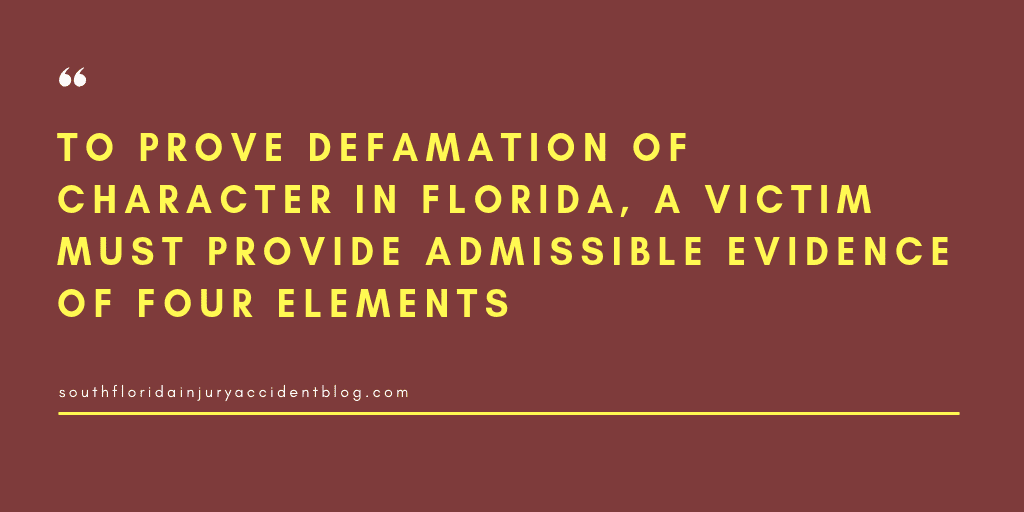 What is Defamation Per Se in Florida?

Sometimes, the evidence needed to prove harm is not a large hurdle to overcome. In these cases, a victim does not have to provide as much evidence to win their case as with other defamation of character claims.

This happens when the slanderous or libelous act is considered to be defamation per se. Here, the courts have found that some defamatory statements are so bad that the law will presume that a victim’s reputation has been harmed; the words are so bad, printed or verbal, that the courts impute that harm has happened.

These are words or statements that inspire hatred, distrust, ridicule, contempt, or disgrace; or they harm your work or profession just by being said. See, O’Neal v. Tribune Company, 176 So. 2d 535 (Fla. Dist. Ct. App. 1965)(and litany of cases cited therein).

For more on defamation per se, read our article Defamation Per Se: When Libel or Slander Is So Bad, Do You Need Evidence of Damages Before Punitive Damages Can Be Awarded?

One of the first things a victim should consider before filing a defamation lawsuit is whether or not the law will consider the victim to be a public figure or a private figure – not all defamation plaintiffs get the same treatment under Florida’s defamation laws.

Public figures have a higher hurdle to jump before they can be awarded damages in a defamation case. They have to prove “actual malice” in order to win.

Why? Florida law has a broad definition of “public figures”. The Florida Supreme Court looks at more than popularity. If an individual has some kind of discretion or power over members of the public, then it may be argued that he or she is a “public figure” for purposes of proving a defamation of character claim.

For example, in Smith v. Russell, 456 So.2d 462 (Fla. 1984), a police officer was found to be a public figure who had to prove actual malice to win his defamation case as a “…highly visible representative of government authority who has power over citizens and broad discretion in the exercise of that power.”

See, Is it Harder to Sue for Defamation in Florida if You Are a Public Figure?

The reason defamation of character victims need to determine if they will be considered a “public figure” or “private figure” under Florida law is because of the evidence burden to prove a claim. If a victim is a private figure, the claim is likely easier to prove.

Private figures can prevail with a claim after providing evidence that the defendant was negligent when they spoke or wrote the defamatory statement. Meaning, that the bad actor didn’t bother to check to see if the statements they made were true or false before they made them (something a reasonable and prudent person would do before they made a statement that could harm another person).

See,  Defamation Claims In Divorce Proceedings or Between Ex-Spouses – Do You Have a Libel or Slander Lawsuit Against Your Ex?

Sometimes, defamation can be a crime under Florida law. In fact, there are Florida criminal statutes that define certain written statements as being illegal, which can be found in Florida Statutes 836.01 – 012. These statutes are narrowly written and only apply in specific situations.

For instance, Florida Statute 836.06 forbids anyone to make any false statements about “… the solvency or financial standing of any banking institution or building and loan association doing business in this state.”

Can you ever win a defamation case by arguing that the defamation was implied? Yes, Florida courts recognize the claim of “defamation by implication.”

What is defamation by implication? Unfortunately, in Florida it is not that easy to define.

Here, a defendant says something that is true, but under the circumstances, the statement gives a false impression. “Literally true statements can be defamatory where they create a false impression,” explains the Florida Supreme Court as it recognized this cause of action in Jews for Jesus, Inc. v. Rapp, 997 So.2d 1098, 1106 (Fla. 2008).

For an example of a plaintiff who won their case of defamation by implication, read 3 Examples of Florida Defamation Cases Where Plaintiffs Were Victorious.

What Damages Are Recoverable For Defamation of Character?

It may seem difficult to find evidence of your damages after you have been the victim of libel or slander. Unlike a car accident or a slip and fall, you may not have a file folder filled with doctor bills and hospital invoices. Florida law understands that defamation damages may be hard to prove; still, there are ways to do so.

Some kinds of harm from libel or slander are presumed to exist under the law. These are the kinds of things that everyone understands result from defamatory statements being made about you.

Without invoices or other paperwork, Florida juries can award damages for things like humiliation, impairment of reputation and standing in the community, anxiety, embarrassment, etc.

Defamation damages can also include mental suffering and mental anguish.

See: What Damages Are Recoverable In A Defamation of Character Claim?

Other kinds of harm are those that can be documented. Did you lose your job because of the libel? If so, can you document your damages through pay stubs or income tax statements?

These are damages related to an actual pecuniary loss (something having an economic value). And, a plaintiff suing for defamation of character can be awarded economic damages including lost wages or lost employment as long as the claim can be proven up with paperwork or documentation.

Sometimes, the libel or slander is so shocking and horrible that the law will find it is in the public interest to punish the wrongdoer for their actions. These are called “punitive damages” and they are also available under Florida law.

The Florida Supreme Court has ruled that punitive damages (damages designed to punish the defendant) can be assessed against defendants who defame their victim with malice, or ill will, toward him (or her).

What does the plaintiff have to do here? Provide evidence that the defendant acted with “ill will, hostility, and an intent to harm the plaintiff.”

For more, read Can You Collect Punitive Damages for Defamation of Character?

Once you have proven your defamation case, the defendant may still be able to avoid responsibility. Under Florida law, there are several privileges and defenses which a defamation defendant can assert.

These include the following:

See, Florida Defamation Lawsuits: What are The Defenses to Libel and Slander Claims Seeking Damages Under Florida Law?

Opinion is also a defense to defamation. The First Amendment allows citizens to speak freely and voice their opinions. This is free speech. If someone calls Joe Smith a “fool” or “stupid” then that’s their opinion. The test? The statement cannot be proven to be true or false. It’s just an opinion, even if does do harm to the victim.

See, Can You Sue for a Bad Review? Libel, Slander, and Defamation Lawsuits for Negative Reviews

In social media cases, it’s important to note that the Communications Decency Act provides protections for bloggers and web site owners when a third party posts something defamatory on a blog or website. If there is a defamatory comment left on a blog, then the owner or publisher may be able to argue that federal law protects them against liability.

Yelp’s defense? It is a publisher and these were the comments of third parties. Under Section 230 of the Communications Decency Act, Yelp was protected from liability. The plaintiff could only seek relief from the individuals who wrote the words in the online reviews, not Yelp as a website host.

How long does a victim of defamation of character have to file a lawsuit for the damages they have suffered from libel or slander? Not long! The Florida legislature has defined a time limit for anyone wanting to sue for defamation.

Under Florida Statute 95.11(4)(g), cases based upon libel or slander must be filed within two (2) years of the publication.

Also, a libel victim needs to be careful to meet the “single publication rule” of Florida Statute 770.07. There, the time deadline begins to run “…at the time of the first publication or exhibition or utterance thereof in this state.”

The bottom line here is don’t procrastinate if you think you have a defamation of character claim. The statute of limitation law is an absolute bar, no matter how seriously your reputation has been injured.

If you have been harmed by libel or slander then you may have a legal claim for damages against those who made the defamatory statements.

Under Florida law, each defamation of character case is different.  Each bad act has to be evaluated not only on what was said or written, and where, and about whom the statements were made, but also in terms of damages.  What damages can be presumed under the law?  What damages must be proven with documented evidence?  Are the damages larger enough to justify the time and expense of a lawsuit?  Can the victim collect a judgment from the defendant?  Does the defendant have assets? Does the wrongdoer have insurance?  Is the wrongdoer’s asset protected?

If you believe you have a claim for defamation, a good piece of advice is to speak with an experienced Florida defamation lawyer to learn about some of the issues that can arise with these claims, including the type of evidence needed to prove a claim and the type and amount of damages you can recover. Most personal injury lawyers, like Alan Sackrin, will offer a free initial consultation (over the phone or in person, whichever you prefer) to answer your questions.