Slip and Fall in Your Hotel Shower

Who is responsible for your fall? What is a fair settlement? Get answers about bath mats, handrails, and the duties to protect guests.

Throughout the year, couples, families, and retirees alike travel to Florida to enjoy the beach, cosmopolitan nightlife, and/or our world-renown gourmet restaurants located in Orlando, Broward, Miami-Dade, and Palm Beach County.

Florida is the top travel destination in the world, which means there is an abundance of hotels here. In fact, in 2019 records show the State of Florida had over 439,000 hotel rooms — and more hotel rooms are being built here all of the time.

As more people visit Florida, so do the number of hotel shower slip and fall injuries. In fact, for years, we have seen an increase in the number of local and out of state hotel guests hurt in Orlando, Miami, Tampa and Fort Lauderdale, which is where the highest concentration of activity occurs.

Quick Tip: The Average Settlement Value of A Hotel Negligence Claim Is $40,000.00 (Details)

As a guest in a Florida hotel, you expect the hotel will take all reasonably necessary steps to keep you safe – but what happens if the hotel fails to do so and you are hurt in your shower or bathroom from a fall? Florida’s premises liability law allows victims to recover compensation for their injuries. The State of Florida, as well as the hotel industry, have a strong financial incentive to want to keep guests safe and they expect their hotel operators will take steps to do so.

That’s why if a victim can show (prove) that the hotel was negligent, then Florida law allows a victim to recover damages related to medical bills, lost wages, pain and suffering, scarring and disfigurement, and other economic and non-economic damages. 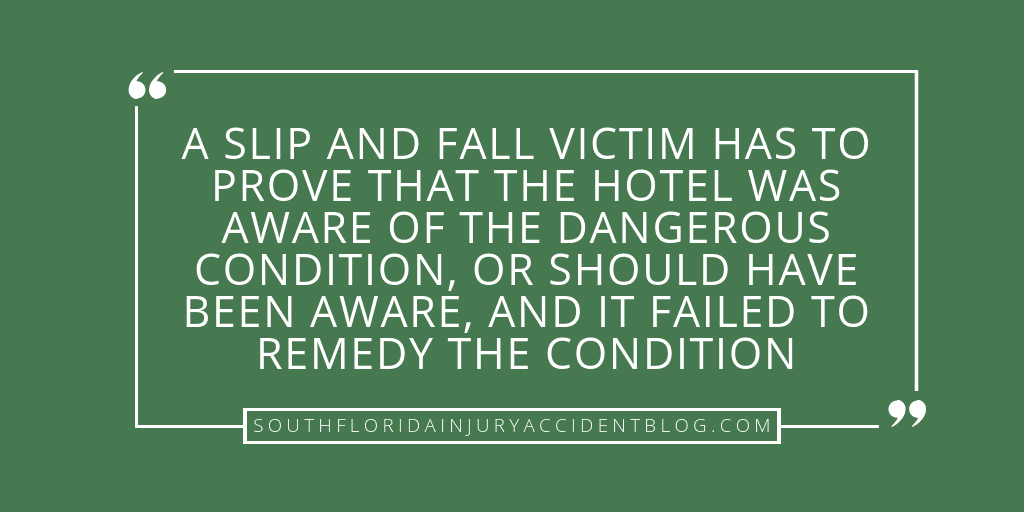 However, in order to prevail victims have the obligation to prove the hotel is responsible for their injuries. Pursuant to Florida Statute 768.0755, as well as case law, an injured party must show that the hotel breached its duty of care because it was aware of a dangerous condition (actual knowledge), or should have been aware of it (constructive knowledge) and that the hotel failed to remedy the condition. These are not easy requirements to satisfy, considering that the victim got hurt in a private hotel bathroom, but it can be done as shown by the cases below (as well as the hotel shower slip and fall case we recently settled for a client for $75,000.00).

Proving Negligence In A Fall In A Hotel Shower – Did The Hotel Act Reasonably?

In Cooper Hotel Services, Inc. v. MacFarland, Mrs. MacFarland slipped and fell while taking a shower in the bathroom located in her hotel room. After she was unable to settle her damage claim with the hotel, she filed a lawsuit against the hotel based upon Florida’s premises liability law. Under that law, she had a duty to prove with admissible evidence that the hotel had been negligent, and therefore had breached its duty of care to her.

Proving that negligence caused Mrs. MacFarland to fall was difficult to do, given that she had fallen in the tub while the water was running and she was alone at the time. The tub she fell in was one of the common shower-bathtub combos, and, according to the court, there were many ways for her to show that the hotel’s negligence caused her to fall.  For example, had she shown that the hotel’s failure to properly maintain the tub made it dangerous, she would have met her burden of proof.

However, even though her damage award was reversed the case is still helpful to slip and fall victims because it provides and outlines how someone hurt in a fall, alone in a hotel shower or bathtub, can prove their case. It also makes it clear that Florida hotels need to provide rooms with safe and secure showers and baths because of the high risk of falls from slippery floors.

For example, hotels should have non-slip surfaces on bathroom floors and, if provided by the hotel, rugs backed with non-slip protection, too.  Additionally, Florida hotels should inspect their rooms routinely to insure that these anti-fall protections are in place and in good working order. Shower handrails and handrails near the toilet need to be fixed firmly on the wall. Non-slip protection on bathtubs need to be clean and maintained according to manufacturer recommendations. If the tub has a textured surface, then the surface needs to be clean and not slippery from soap scum and other foreign substances

Furthermore, the case is helpful because it outlines the type of evidence needed to establish that a hotel has breached its duty of care to a victim of a bathroom slip and fall. According to the case, a victim should show, through admissible evidence, things like:

Is the Hotel Responsible?: Tripping On a Rolled-Up Bath Mat in The Middle of the Night

In Rubey v. William Morris, Inc.,  Mrs. Rubey was a hotel guest who got up in the middle of the night to use the restroom and was hurt when she tripped over a bath mat that had been left on the floor rolled up and not laid out flat on the floor. The hotel refused to honor and settle her claim, so she filed a lawsuit. Noting that this was an expensive hotel suite, the court pointed out that Mrs. Rubey and her husband had a right to assume that their hotel room would be “… reasonably free from defects or obstructions that might cause injury.”

Mrs. Rubey’s argument that it was not reasonable for a guest to be on the alert for a rolled-up rug to be left on the bathroom floor, and that by not having that rug lying flat caused a dangerous condition for which the hotel was responsible. The court agreed with her.

An important fact in the case is that she would have had to cross the room in order to turn on the overhead bathroom light. The light switch was on the other side of the room from the entrance with the rolled-up bath rug between her and that switch.

How Difficult Are Florida Hotel Shower Slip and Fall Cases to Win?

Most Florida hotel rooms are safe and well maintained and most owners use their best efforts to keep things that way. However, when someone is hurt in a fall in a Florida hotel or motel shower, the injured party can expect a vigorous defense by the property owner and their insurance company.

This is why it is important to gather evidence as soon as possible after a fall and demand that the hotel preserve any evidence of the accident.

Equally important is understanding how the hotel industry works and being aware of the laws and regulations that apply to the hospitality industry. For example, is there a local ordinance (like in Broward County) that requires a hotel bathroom and shower floor surface to be covered with a nonabsorbent material? Or, did the hotel’s insurance company conduct a risk control survey? If so, what were the results, and did the hotel implement any of the recommendations to mitigate risk?

Knowing how to gather evidence and how to make demands on a hotel (and knowing which experts to hire and which economic and non-economic damages to seek) can be the difference between winning and losing a case. Hotel bathroom slip and fall cases are not the easiest cases to win, especially those against a well-funded hotel, but this does not mean that justice should not and will not prevail.

Will A Victim Have To Come Back To Florida To Pursue His Or Her Claim?

Another event that may require a victim to return to Florida is if there is a mediation. Again, there is good news and that is in many situations the victim may be able to appear at the mediation by telephone.

The third most likely time a victim will have to return is if the case goes to trial, which is one of the most unlikely outcomes for a personal injury lawsuit.

The bottom line here, is almost all personal injury cases are settled, which means it is unlikely a victim will be required to return to Florida to get compensation, but it can happen.

What Steps Should All Hotels Take To Satisfy Their Duty of Care?

Insurance companies that write policies for hotels create risk manuals and risk assessments that target slip and fall accidents for specific locations, including bathtubs and showers. See, for example, the Traveler’s Risk Control – Evaluation Guide (Note: Over the years, we had to change this link a few times because the manual has been removed, or is no longer be accessible, from several websites, including CNA.com.)

If you or a loved one has been involved in a slip and fall accident in a Florida hotel bathtub or shower, then you may be interested in evaluating that accident from the insurance carrier’s perspective. Did the hotel take steps to meet its duty of using reasonable care?  Did it inspect the shower and did it to do so on a regular basis?

Below are some other issues to consider when trying to convince an insurance adjuster that their insured didn’t act reasonably to protect its guests, and therefore was at fault for the accident (from material provided by Travelers, CNA (this link has changed a few times too) and Zurich):

The bottom line here is that hotels have a duty to:

A victim should use these questions against a hotel and gain leverage to get a settlement. Remember, these questions were taken directly from an insurance company manual. They are the recommended steps or procedures a hotel should take to minimize the risk of an injury. If the hotel doesn’t follow those recommendations, then why didn’t it do so?

A good piece of advice if you have been harmed by a slip and fall in your hotel shower or bathroom, is to speak with a personal injury lawyer who has spent years evaluating accident facts, applying the law, and effectively asking juries to render a favorable verdict. Most personal injury lawyers who meet these criteria, like Alan Sackrin, will offer a free initial consultation (over the phone or in-person) to answer your questions.

Do you have questions or comments? Then please feel free to send Alan an email or call him now at (954) 458-8655. Doing so will put you in contact with an attorney who has for years represented local and out of state guests hurt in Orlando, Miami, Tampa, and Fort Lauderdale hotels.