As one of the top vacation destinations in the United States, South Florida has a lot of hotels. Orlando alone boasts the second-highest number of hotel rooms in the entire world, according to one report, ranking just below Las Vegas.

With so many hotels, it’s easy to see why hotel slip and falls are among Florida’s top categories when it comes to personal injury claims.

Hotels aren’t like other public places, according to personal injury lawyer Alan Sackrin.

“A lot of times, people walk around barefoot in the pool area, they wear sandals and flip-flops instead of shoes that cover the whole foot, or they may have had some alcohol at a pool bar,” he says. “Unlike most other public places that people visit regularly, hotels are also typically unfamiliar territory for the guests who stay there.”

Get An Edge By Knowing The Law: Hotel Accident Claims

Beware of the Bathroom

Hotel slip and fall accidents can occur just about anywhere on a hotel property, Alan says, but the most common ones he has encountered over the years are those that occur in hotel bathrooms.

“There are quite a few hotel slip and fall cases that occur in the bathtub or shower,” he says. “Whenever you have water, bare feet, and a smooth, slippery surface like porcelain or tile, there is a risk for injury due to a slip and fall.”

Hotels have a responsibility to make sure some sort of non-skid surface is applied to the shower or tub to reduce this risk, Alan says. 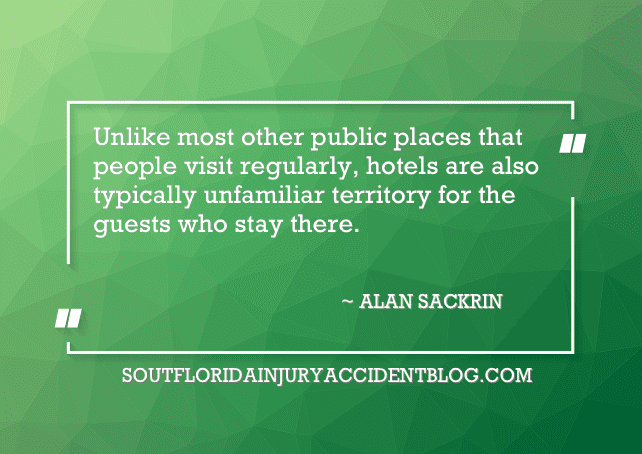 “Now, a lot of hotels say it’s not a standard of care to have a bathmat there because they get moldy or experience other conditions that make them slippery,” he says, “but I’ve had two situations where after the fall, the hotel has said to the person, ‘Oh, you could have asked for a bathmat.’ Not that they had one there, available, and maybe rolled up nearby, but that the guest could have asked for one and had it provided to them. How could they have known that?”

Hotel bathroom slip and fall cases are historically difficult to prove, Alan says, especially if the victim can’t get a friction expert to the scene relatively soon afterward.

“They’re hard-to-prove cases, because everyone thinks, ‘Oh, you’re in a bathtub; it’s going to be slippery,’” he says. “But when you think about it, a lot of times when you get into a bathtub, your footing is fine, because there is some type of non-skid, non-slip type of resistance, whether it’s stickers or mats or etchings in the surface of the tub itself, which makes it non-slip.”

It’s when hotels fail to provide any sort of slip prevention, however, that serious injuries occur, such as lacerations or even fractures, he says. While they can be hard to prove, many hotel bathroom slip and fall cases are winnable.

“We don’t take every one of these cases that come our way,” Alan says. “And sometimes, the ones we do take we won’t try to take to trial. We’ll try to litigate them instead.”

Despite the frequency of hotel bathroom slip and falls, other areas of a hotel can be just as dangerous, Alan says.

“One of the most bizarre cases of a hotel slip and fall that I can remember was one where we had to go to trial,” he says. “It was actually in the lobby. A lot of people used this lobby because it was a combination hotel and condominium and the lobby area had stores there on the first floor.”

Alan’s client was a massage therapist who went into the hotel carrying a massage table. She was headed upstairs to provide a massage for a client who was staying there.

“Just before she came in, a person in the lobby got sick and threw up,” Alan says. “When she came in, my client didn’t see it and about a minute or so after it happened, she slipped on it and was injured.”

Normally in slip and fall cases involving a hotel, the victim must show that the hotel knew or should have known about the hazard and either did nothing about it or didn’t do enough to change the dangerous condition, Alan says.

“In this case, after just a minute or two, it was easy for the hotel to argue that they couldn’t have known about it and didn’t have enough time to react to it,” he says. “It just so happened, however, that two of the hotel’s managers were there, and one of them was nine months pregnant. The pregnant woman saw it from a certain distance away, but because she was pregnant, she wouldn’t go near it. The other manager in the lobby went and told someone, leaving the scene completely unprotected. So, there it was, with no warning or indication that there was a hazardous condition all over the floor.”

At trial, the hotel argued that this was a clear instance of a sudden, unforeseen emergency and therefore what the managers did was right and reasonable under the circumstances, Alan says.

“Our argument was that someone should have stayed in the area, at the very least to attend to the sick person, but also to make sure others were alerted to the situation, so they weren’t impacted or affected by it,” Alan says. “My client had a very large massage table that she brought in with her. Complicating the situation even further was that it was a light-colored floor and the vomit was light-colored, as well, so the hazard was difficult to see.”

Alan says he never argued that it was appropriate or even possible for the hotel to have cleaned up the mess during that small window of time.

“Instead, this was more of a failure to warn,” he says, “They may not have had time to clean it up, but they knew of the condition and chose to leave it unattended.

His client was significantly injured in the ensuing fall, Alan says.

“The accident aggravated a pre-existing knee condition she had,” he says. “That’s also why it went to trial. My client had a couple of surgeries after this incident due to the severity of the fall. I mean, she had this big massage table with her, and it was really a terrible accident. Even though she had surgery a couple of years prior to this incident, we were able to prove the situation in the hotel caused further injury and compounded her existing condition.”

Ironically, in the middle of the jury trial, the defense lawyer for the hotel got sick and had to be taken to the hospital, Alan says. Upon his return, the parties agreed to have the case heard before a judge. In the end, Alan says, the plaintiff didn’t get as much as he would have liked to see her get, but she still received a “decent” amount of compensation from the hotel.

Another case that occurred outside of a hotel bathroom was one Alan recently worked on with a lawyer in Orlando. That case is still working its way through the court system.

“My client was a woman from up north who was in Orlando with her family for a lacrosse tournament,” Alan says. “They were staying in a hotel near Disneyworld and were at the hotel pool when it started pouring pretty hard.”

When the rain finally let up, they began to walk back to the room. The woman had no trouble walking on the wet concrete leading away from the pool, but they soon encountered a covered outdoor area with a wet painted surface.

“Her first step on that, and she slid like crazy,” Alan says. “She suffered multiple injuries to her neck and her wrist and some other areas. During our preparations for trial, we alleged that the type of paint they put on the surface was too slippery when it got wet. The coefficient of friction for this surface was below standards when it got wet. When she was walking back from the pool, she had no problem. As soon as she stepped onto this painted surface, though, that’s when she slipped, and the injuries occurred.”

a. the existence of a duty for the hotel to take steps to protect its guests and others including the plaintiff;
b. a failure on the part of the hotel to perform that duty; and
c. an injury or damage to the plaintiff which was caused by that failure.

For 38 years, Alan has been examining accident facts fairly, applying the law, and effectively asking juries to render verdicts for his clients. He is a Board Certified Civil Trial, which means he can refer to himself as an expert civil trial lawyer. Alan Sackrin offers a free initial consultation (over the phone or in-person) to answer your questions.

Do You Have a Question?

Fill out the “Talk With Us” form at the top of this page to ask a question, give Alan a call at 954-458-8655, or send us an email through our contact us form. Alan will get back to you promptly.

Sharing What I Know So You Don’t Settle For Less