In Florida, Is There A Duty To Warn Of A Protruding Bottom Portion Of A Clothes Rack?

Shopping in South Florida is not just for tourists and other visitors to our fine State. Locals and other people who live here enjoy spending time at places like the largest outlet mall in the country, Sawgrass Mills, as well as at prime shopping venues like Miami’s Lincoln Road Mall or Fort Lauderdale’s Galleria.

A large number of the stores at these venues are chains or franchises, with an amazing amount of marketing know-how and management training behind them. The layouts of these stores are planned; the displays are carefully staged. Part of these schemes work to attract customers to the products for sale — dresses, handbags, shirts, jeans — but there’s another reason for how these places are designed and set up: to avoid liability for accidents, including slip and falls. 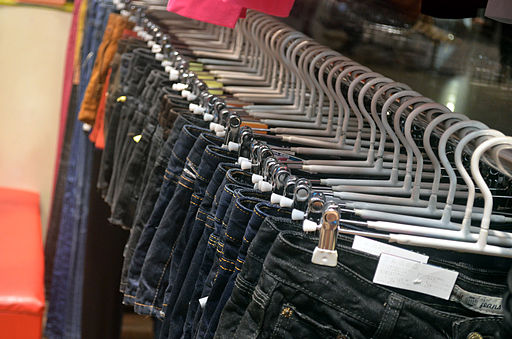 What Duty Does A Business Have To Its Customers?

As we discussed in last week’s post, all Florida businesses — including stores and shops and malls — have a duty to customers coming onto their property. If a business is inviting someone to walk into their place, with the goal of getting them to spend their money and give that business a profit, then there’s an obligation or duty owed to that person.

That business has a duty to keep that customer or potential buyer safe while they are there. And to warn them of risks while they are on their business premises. This is called the “duty to warn.”

Clothing stores in shopping malls (as well as stand-alone shops) have to let you know about any kind of dangerous condition on the business premises. It’s the law (read the statute here). Also check out some of our prior posts, including:

Specifically, what happens if a customer trips and falls on a protruding bottom portion of a clothes rank in the store? Is the customer at fault, or is the store liable?

Back in February 2007, Maria Rocamonde was shopping at Marshalls. She was a regular customer for over ten years and every week she had shopped her local Marshalls for bargains.

Maria was in the store one day doing what she always did: scouting for good buys at better prices than the department stores, just like Marshalls is famous for having.

This particular day, Maria was on her way to the shoe department. She was walking down the center aisle of the store (which any customer of Marshall’s can easily visualize – it’s smack dab in the middle of the store, with lots of goods on display). There in the center aisle that day was a special clothing rank (Maria would testify that it was “S-shaped”.)

(Later, a Marshalls employee would testify that this was called a “Z”-rack. The store uses these kinds of clothing racks to move merchandise to different parts of the store.)

Maria Tripped And Fell On A Piece Of Metal Protruding From A Clothing Rack.

Maria wasn’t interested in what was on that rank; she was on her way to check out shoes. But as she roamed down the center aisle and turned to go toward the shoes, she tripped and fell on a “piece of iron protruding from the bottom of the rack.” She “got tangled up” and “fell forward.” She testified that she had seen these S-shaped ranks before, but that she didn’t know that the bottom of these racks have “some steel that overlaps.”

Maria explained that had she known that this thing was “sticking out as much as it was” she would have given that rack lots more space and veered further away from it. It was simply hidden from view and she didn’t see the danger before she tripped over it and fell down, and was hurt.

Maria filed a claim for damages with Marshalls and they didn’t want to pay her claim. Negotiations failed. Maria Rocamonde had no choice but to file a personal injury lawsuit against the store for damages. She sued Marshalls of Ma, Inc., for negligence.

Marshall’s fought hard against having to pay. They filed a motion for summary judgment at trial, and won. But Maria didn’t give up — she appealed that decision. And the trial judge was reversed.

The Reviewing Court Agreed With Maria: The Store Had a Duty to Its Customer

According to the reviewing court, Marshall’s (and any other Florida business) has two duties to customers: not only (1) to warn them of hidden dangers, things of which the customer isn’t aware, but (2) to use ordinary care to keep the store in a reasonably safe condition. These are two different duties.

If the store meets one duty – like warning of a danger – it doesn’t mean that they have met that second duty, to keep the store aisles in a reasonably safe condition.

The trial judge didn’t make a call on whether or not Marshall’s had failed in its duty to Maria Rocamonde to keep the store premises in a reasonably safe condition. The trial court judge ruled only on the other duty, and held that because Maria “had ample opportunity to perceive the condition and positioning of the rack … Defendant does not have a duty to warn against a condition that is patent and obvious.”

The reviewing court disagreed. Even if the clothing rank was open and obvious to Maria there in the center aisle, that piece of iron sticking out from the bottom of that rack was not.

“There is evidence that she tripped over the protruding base of the rack which was hidden or obscured from her view. It cannot be said as a matter of law that Rocamonde was aware of this condition.”

So, the reviewing court returned the case back to the trial court, where it would either be settled or go to a full jury for a jury verdict.

Ethel was shopping for clothing at the thrift store, and as you’d expect these premises were much more modest than those at Marshall’s. Here, there was a platform that stuck out from the wall for around 9 feet, went down the wall for about 12 feet, and stood on a platform about 6 inches high.

Mounted on the wall of that platform was a pipe that served as a clothing rank. The Association hung clothing on the pipe for customers to peruse and buy. That pipe went past the edge of the platform, by around 4 feet. It was painted yellow.

When Ethel stepped up on that platform to check out the clothes, things were okay. She shopped along there, moving down the pipe and looking at the clothing. However, when she reached the end of the platform, she fell down as she stepped off of it, and in doing so hit that pipe / clothing rack.

It was a nasty fall. Ethel broke her arm in the fall and she also fractured several ribs.

Once again, the store didn’t want to pay and the accident victim was forced to file a lawsuit. Ethel Harigel filed a personal injury lawsuit against the store owner claiming damages based upon the “negligent maintenance of the premises.”

At trial, the judge ruled in the store’s favor. So, Ethel took her case to the reviewing court.

There, it was found that the conditions that day did not amount to an “open and obvious” circumstance that protected the store from a negligence claim. Just because Ethel knew the floor was raised because she stepped up on the platform didn’t mean it was obvious she could fall at its end. After all, the clothing rank displayed items with the intent that the customers’ eyes would be focused on the items for sale, not on their footpath. Add to that the extension of the clothing rack (pipe) beyond the end of the platform, and the store had a duty which may or may not have been violated.

That was a question for the jury, not a ruling for the judge to make. So Ethel’s case was also returned to the trial court, where the store could either settle with her or let the jury figure things out.

If you have been hurt in a slip and fall accident while shopping in a store here in Florida, then special Florida laws apply to your case. It is important that you know your legal rights in these situations, as well as the duties that the store owes you as its customer. It doesn’t matter if you bought anything at the store or not. The fact that they invite you onto their property in order to make a profit is enough to require them to abide by Florida’s premises liability law.  However, be aware and expect a fight — just like Maria and Ethel had. These businesses will defend themselves and claim that the accident was your fault, or that they had no duty to warn you of the dangerous condition.

A good piece of advice if you have been harmed by a slip or trip and fall at a store or other retail establishment, is to speak with an experienced personal injury lawyer before you file a claim to learn about some of the issues that can arise with these claims, including the type of evidence needed to prove a claim and the type and amount of damages you can recover. Most personal injury lawyers, like Alan Sackrin, will offer a free initial consultation (over the phone or in person, whichever you prefer) to answer your questions.

For more information regarding what you need to prove in a Florida slip and fall premises liability case, go here.

If you found this information helpful, please share this article and bookmark it for your future reference.
(Visited 430 times, 1 visits today)