Free speech is sacred in the United States. We take pride, as Americans, in being citizens of a country where we can all speak our minds. We can speak what we want, we can write what we want, and we’re free to do so. That’s what makes America great, right?

Freedom of Speech and Defamation

Freedom of speech, as written in the Bill of Rights, is one of the key distinctions between our country and most of the rest of the world. However, in Florida, like in other states, some of us assume that we are free to tweet, to gossip online or at work, to write comments on a web site or to pen letters to the editor and say whatever we like with impunity.

But that’s not the case. In fact, lots of people who have thought this way have found themselves liable for large sums of money in damages. (For some examples, check out our prior post.)

In the United States, and in Florida, freedom of speech is not limitless; if someone exceeds their boundaries, there are laws that are designed to protect the person whose character has been tarnished and/or harmed.

Defamation of Character as a Criminal Act

Did you know that most countries have criminal laws where it is a crime, punishable by time behind bars, for defaming the character of another?

In Turkey, for instance, a person who insults or mocks their president will be arrested for criminal defamation. As a matter of fact, there was an international scandal a while back related to a German comedian named Jan Bohmermann being prosecuted for making fun of the Turkish president. 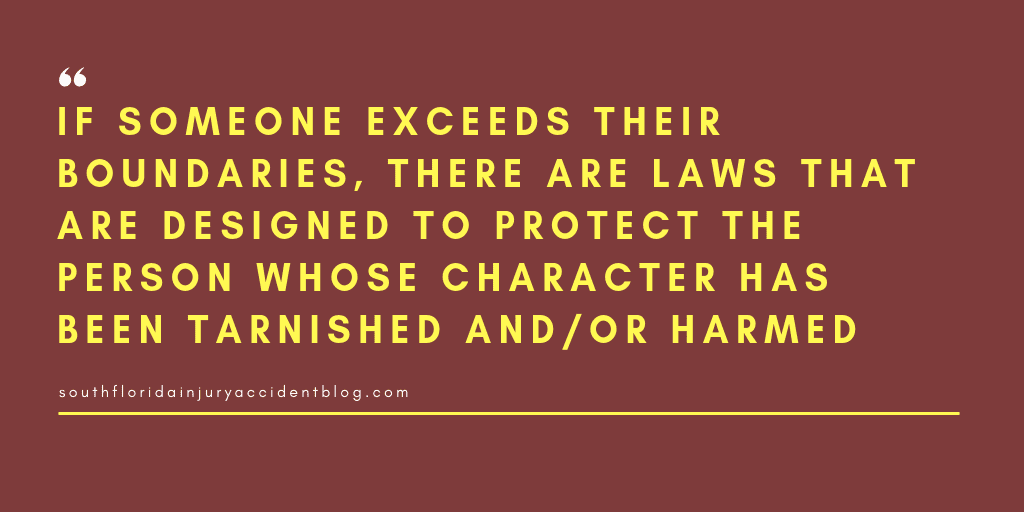 Defamation as a Crime in the United States and Florida

But that’s Europe, right? Well, a recent Committee to Protect Journalists’ report found that in all of North and South America, only Jamaica did not have a criminal law for defamation.

According to the International Press Institute, right now there are 15 states with criminal laws that make it a crime to defame someone.

Around 1945, the Florida Legislature passed Chapter 836 of the Florida Criminal Code, which made certain types of speech and writings a crime.

Under the law (see below), there is no break down or list of the specific elements of proof needed to show criminal libel. Instead, the law focuses upon specific areas or targets of defamation, like banks and financial institutions; or women who may be harmed by statements “falsely and maliciously imputing to her a want of chastity.”

(Notice how some of these crimes are defined as minor crimes, e.g., misdemeanors, while others are considered serious enough to being considered felonies)

(1) No person shall print, write, publish, circulate or distribute within this state any newspaper, magazine, periodical, pamphlet, or other publication of any character, either written or printed, wherein the alleged immoral acts of any person are stated or pretended to be stated, or wherein it is intimated that any person has been guilty of any immorality, unless such written or printed publication shall in such article publish in full the true name of the person intended to be charged with the commission of such acts of immorality.

836.04 Defamation.—Whoever speaks of and concerning any woman, married or unmarried, falsely and maliciously imputing to her a want of chastity, shall be guilty of a misdemeanor of the first degree, punishable as provided in s. 775.082 or s. 775.083.

836.05 Threats; extortion.—Whoever, either verbally or by a written or printed communication, maliciously threatens to accuse another of any crime or offense, or by such communication maliciously threatens an injury to the person, property or reputation of another, or maliciously threatens to expose another to disgrace, or to expose any secret affecting another, or to impute any deformity or lack of chastity to another, with intent thereby to extort money or any pecuniary advantage whatsoever, or with intent to compel the person so threatened, or any other person, to do any act or refrain from doing any act against his or her will, shall be guilty of a felony of the second degree, punishable as provided in s. 775.082, s. 775.083, or s. 775.084.

836.06 Punishment for making derogatory statements concerning banks and building and loan associations.—Any person who shall willfully and maliciously make, circulate or transmit to another or others any false statement, rumor or suggestion, written, printed or by word of mouth, which is directly or by inference derogatory to the financial condition or affects the solvency or financial standing of any banking institution or building and loan association doing business in this state, or who shall counsel, aid, procure or induce another to start, transmit or circulate any such statement or rumor, shall be guilty of a misdemeanor, and upon conviction thereof shall be guilty of a misdemeanor of the first degree, punishable as provided in s. 775.082 or s. 775.083.

836.07 Notice condition precedent to prosecution for libel.—Before any criminal action is brought for publication, in a newspaper periodical, of a libel, the prosecutor shall at least 5 days before instituting such action serve notice in writing on defendant, specifying the article and the statements therein which he or she alleges to be false and defamatory.

836.09 Communicating libelous matter to newspapers; penalty.—If any person shall state, deliver, or transmit by any means whatever, to the manager, editor, publisher or reporter of any newspaper or periodical for publication therein any false and libelous statement concerning any person, then and there known by such person to be false or libelous, and thereby secure the publication of the same he or she shall be guilty of a misdemeanor of the second degree, punishable as provided in s. 775.082 or s. 775.083.

836.11 Publications which tend to expose persons to hatred, contempt, or ridicule prohibited.—
(1) It shall be unlawful to print, publish, distribute or cause to be printed, published or distributed by any means, or in any manner whatsoever, any publication, handbill, dodger, circular, booklet, pamphlet, leaflet, card, sticker, periodical, literature, paper or other printed material which tends to expose any individual or any religious group to hatred, contempt, ridicule or obloquy unless the following is clearly printed or written thereon:
(a) The true name and post office address of the person, firm, partnership, corporation or organization causing the same to be printed, published or distributed; and,
(b) If such name is that of a firm, corporation or organization, the name and post office address of the individual acting in its behalf in causing such printing, publication or distribution.
(2) Any person, firm or corporation violating any of the sections of this statute shall be guilty of a misdemeanor of the first degree, punishable as provided in s. 775.082 or s. 775.083.

What is the Status of the Florida Criminal Defamation Law?

In Shank, a Florida appeals court held that one portion of Chapter 836 was unconstitutional, Florida Statute 836.11 (involving anonymous defamation of individuals or religious groups).

What happened in this case? Back in August 1999, an anonymous letter was sent to the members of the Broward County Board of Commissioners. It wasn’t mailed at the post office; it was delivered via the County’s internal mail system. The letter was vile, containing anti-Semitic comments.

A police investigation was begun based upon the Florida criminal libel law, Florida Statute 836.11, which prohibits publications tending to expose persons to hatred, contempt, or ridicule. A suspect was located and interrogated by police.

He then admitted to the police detective that he wrote the letter, and he was arrested on the misdemeanor charge. His lawyer then argued that this portion of the statute was unconstitutional and violated the letter writer’s protected free speech. The trial court agreed, and the state prosecutors appealed to the Fourth District Court of Appeals. That court agreed with the trial judge and held the writing was protected speech.

2. Does the Prosecution of Criminal Libel and Slander Happen Often in Florida?

Ask most Florida lawyers, and they’ll tell you that it’s not often that anyone is prosecuted under Florida’s criminal defamation laws. And that’s true, historically. However, the explosion of unregulated internet content may be changing things.

According to recent studies, it’s becoming more common in the United States for crimes to be charged because of libel and slander on the web. See, “Special Report: Criminal Libel in the United States.” Which means that it’s likely that Florida prosecutors may be relying on these criminal laws more in the future as online defamation cases, especially libel and slander on social media sites, continues to grow.

3. What Is The Real Remedy for Defamation Victims?

For some victims of libel and slander here in Florida, that’s probably very good news. Crime victims want to have those crimes prosecuted.

However, the reality is that justice for someone who has been defamed in Florida, either in writing (libel) or verbally (slander), will still likely happen through the civil system of justice.

How? The victim files a lawsuit based upon our personal injury laws and asks for monetary damages to be assessed against the wrongdoer. He or she can ask for real damages — like lost wages, lost work opportunities, and medical expenses resulting from anxiety, depression, etc., — as well as requesting that punitive (or punishment) damages be assessed against the defendant.

This is  how personal injury lawyers can get defamation crime victims justice, in the civil courtroom; it doesn’t matter if the state prosecutors decline to pursue a criminal prosecution against the wrongdoer nor does it matter if no arrest is ever made for the crime.

What matters is that the defendant is held accountable and the victim is made whole.

Civil lawsuits can begin — and conclude — independently of the criminal justice system.

And in reality, while not having an arrest on their record or not having spent time behind bars may seem like a relief to the wrongdoer, having to face large damage awards in a civil injury lawsuit may be punishment enough. Especially if punitive damages are awarded.

For more information here, read our past posts including “Can You Collect Punitive Damages for Defamation of Character?”

Are You a Victim of Defamation of Character?

Simply stated, if you or your business has been harmed by statements made by someone else, either verbally or in writing, then you may be able to recover damages for your injuries.  It all depends on the nature and the veracity of the statements.

For this reason, each defamation claim should be analyzed on its own individual circumstances by someone with experience in these cases. This is true even where you believe a crime has been committed but the criminal justice system turns a blind eye to the wrongdoing.

A good piece of advice if you believe you have a defamation claim, is to at least speak with an experienced personal injury lawyer to learn about some of the issues that can arise with these claims, including the type of evidence needed to prove a claim and the type and amount of damages you can recover. Most personal injury lawyers, like Alan Sackrin, will offer a free initial consultation (over the phone or in person, whichever you prefer) to answer your questions.

If you found this information helpful, please share this article and bookmark it for your future reference.
(Visited 719 times, 1 visits today)