As we all know, the failure to drive in a prudent and responsible manner puts both that driver, his passengers, and others on the road at risk for serious injury or even death.

In Florida, there are laws to protect people from drivers who are driving recklessly or carelessly. While many use these two words interchangeably, they are not the same.

Under Florida law, a charge of“reckless” driving is a more serious offense than a charge of “careless” driving. Driving that is “reckless” may result in arrest and potentially criminal prosecution.

“Careless driving” in Florida usually only results in a citation as well as potential civil liability for injuries caused by the driver. Careless driving is negligent driving, meaning the driver fails to use reasonable care. Reckless driving connotes more than just failing to use reasonable care. It is a basically a total lack of care wherein the conduct is substantially certain to result in an accident and injuries.

In Florida, anyone who chooses to operate a motor vehicle has a legal duty to drive that vehicle with ordinary and reasonable care. All states have laws that govern the rules of the road.

Florida law considers motor vehicles as “dangerous instrumentalities.”[1] Cars, minivans, trucks, SUVs, motorcycles: these are vehicles, or “instrumentalities,” that have the capability of seriously injuring or even killing a human being.

In 1920, the Florida Supreme Court recognized that automobiles were dangerous and the “dangerous instrumentality doctrine” was created by judicial decision placing liability on the owner of a motor vehicle for the negligence of a person operating the vehicle with the consent of the owner. It is based on “… the practical fact that the owner of an instrumentality which [has] the capability of causing death or destruction should in justice answer for misuse of this instrumentality….” [2] This legal doctrine was then extended by the courts not just to cars but other motorized vehicles operating both privately and publicly (e.g., buses, tow trucks, etc.). [3] However, the Florida legislature and the United States Congress has substantially limited or in some cases eliminated the dangerous instrumentality doctrine. 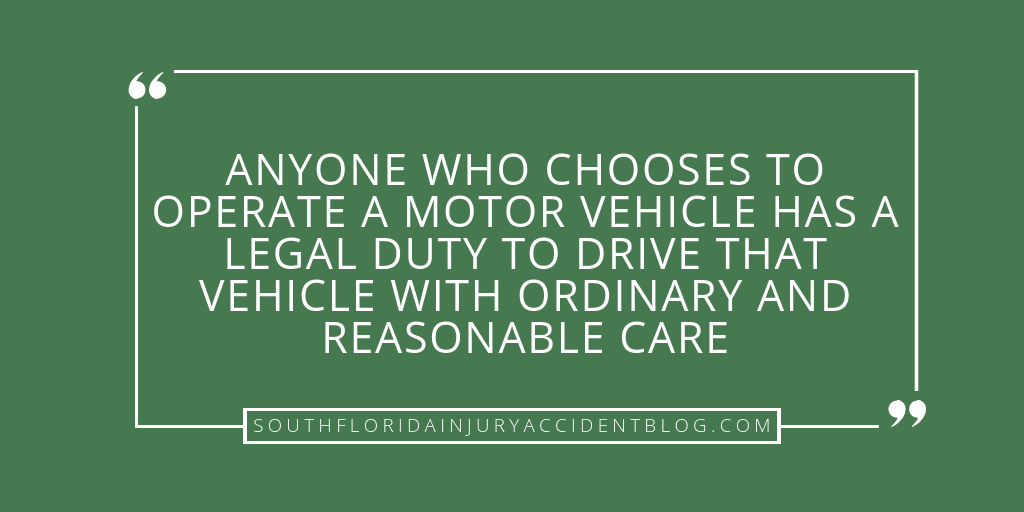 Traffic tickets are a common form of punishment for someone charged with “careless driving”, unless the driver is going substantially over the speed limit. Under Florida law, some examples of careless driving include drivers who rear end other vehicles, drivers who fails to stop at a stop sign, and drivers who run a red light. However, many times the officer will cite the driver for the specific offense, such as traveling over the speed limit or failure to yield the right of way instead of charging the offending motorist with the more generic careless driving charge.

(1)  Any person operating a vehicle upon the streets or highways within the state shall drive the same in a careful and prudent manner, having regard for the width, grade, curves, corners, traffic, and all other attendant circumstances, so as not to endanger the life, limb, or property of any person. Failure to drive in such manner shall constitute careless driving and a violation of this section.
(2) Any person who violates this section shall be cited for a moving violation, punishable as provided in chapter 318.
Aggressive careless driving is defined as committing two or more of the following acts simultaneously or in succession [5]:

Reckless driving in Florida, however, is more serious and is defined by Florida Statute 316.192, as driving a vehicle “ …. in willful or wanton disregard for the safety of persons or property.” [6]

These punishments are higher if the person has a criminal record with past reckless driving convictions. The Florida reckless driving law includes a specific definition for “serious bodily injury” in reckless driving cases; it means “an injury to another person, which consists of a physical condition that creates a substantial risk of death, serious personal disfigurement, or protracted loss or impairment of the function of any bodily member or organ.” [7]

Criminal cases proceed independently from civil cases, each with its own rules of procedure and burdens of proof. It is possible that a criminal case for reckless driving will proceed against a driver, brought by state prosecutors, and this case may or may not ultimately be successful. However, this does not mean that that an injured person cannot bring a civil action based on the same conduct. For example, many of us know that O.J. Simpson was acquitted of two murders in 1995, but the estate of one of the victims successfully sued Simpson and won a substantial verdict. This was due, in part, to the much higher burden of proof that exists in criminal cases than in civil cases. Also, in the civil case, new evidence was discovered after the acquittal in the criminal case. Of course, the constitutional guarantee against double jeopardy prevents a person from being tried more than once for the same alleged crime.

In a civil case for damages the plaintiff need only prove negligent conduct and does not need to prove reckless driving in order to recover compensatory damages such as medical bills, lost income/wages and pain and suffering (intangible) damages. However, if the jury hears evidence of reckless driving by the defendant, then the jury may award more compensatory damages than it otherwise would if the evidence only proved negligent conduct which is essentially the same as careless driving, even though the jury should not do this-as the damages are what they are.

Careless driving is a violation of Florida law. However, even if a person is not given a ticket for violating this law, it doesn’t mean an injury victim can’t sue the careless driver for damages. A driver cannot defend a personal injury lawsuit arising from a motor vehicle crash by saying that he or she wasn’t given a ticket. (The fact that the person suing or being sued was issued a traffic citation normally does not come into evidence in a personal injury lawsuit.)

In Florida, negligence is defined as the failure to reasonable care. (For purposes of this article, negligent driving is essentially the same as careless driving.) Negligent conduct can consist of doing something that a reasonably careful person would not do under the circumstances or not doing something that a reasonably careful person would do under similar circumstances. Sometimes negligence is easy to prove such as when a driver strikes another vehicle that is waiting at a red light. Other times, a plaintiff may have to hire an expert witness to determine that the defendant was negligent by showing the defendant was speeding at the time of an accident or had sufficient time to avoid an impact.

Other evidence that is sometimes used to prove a driver was negligent includes photographs of the accident scene, pictures of the vehicles showing damage or lack of damage, photographs of the injured victim showing their injuries, testimony of the parties and witnesses as well as testimony of the investigating police officer and treating physicians or chiropractors as well as the medical records and bills.

Recourse in Florida for those injured by the negligent (careless) or reckless conduct of motorists usually comes through filing an insurance claim, and, if necessary, through filing a lawsuit. Proving a claim can sometimes be difficult to do, but knowing which evidence to gather to show a driver was careless or reckless (expert testimony, witness statements, etc.) can increase the likelihood that a victim can recover all of their damages.

If you found this information helpful, please share this article and bookmark it for your future reference.
(Visited 541 times, 1 visits today)