Anatomy of a Florida Defamation Lawsuit: From The Filing of A Complaint To Appeal

Sometimes getting justice in Florida for defamation (libel or slander) means having to file a lawsuit to recover compensation for your injuries.

However, not every wrongful statement (spoken or written) warrants the filing of a lawsuit (these cases can be expensive and, even if you win your case, you may not be able to recover from the wrongdoer). So, how do you know if you have a case worth pursuing and what are some of the issues that you will face during a defamation lawsuit? 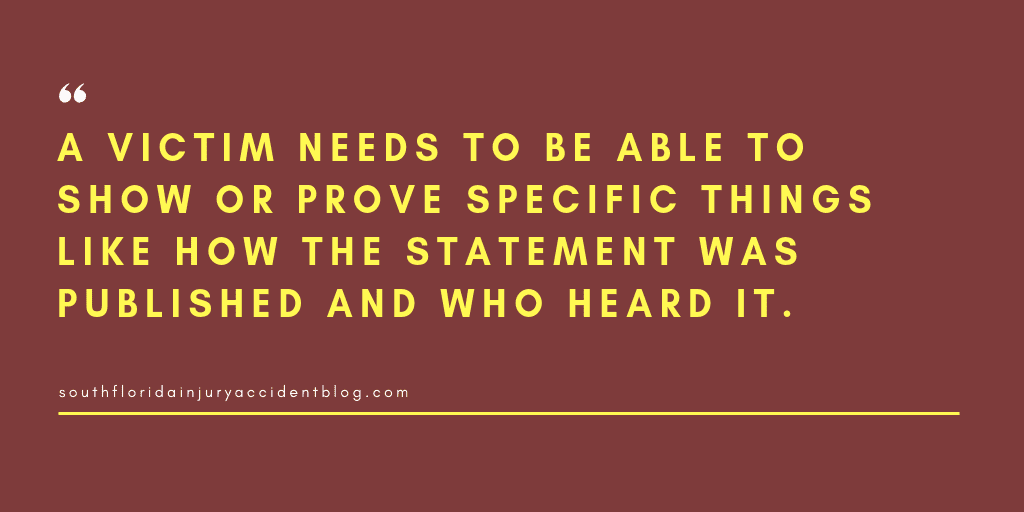 Before anyone takes the step to file a defamation lawsuit, two issues need to be considered.  Can they meet the elements needed to prove a libel or slander claim?  Is there evidence to support a damages claim?

First, a victim needs to analyze and confirm there is evidence to support a defamation of character claim under Florida law.  This includes understanding possible arguments that the defendant may assert to avoid liability.

Specific legal “elements” must be proven to establish libel or slander.   They are:

Notice a victim needs to be able to show or prove specific things like how the statement was published (was it in social media? as gossip at work?) and who heard it.  In order for there to be defamation, at least one-third party has to have been exposed to the defamatory statements.

For more on the different kinds of defamation of character claims in Florida, read our earlier posts:

Next, a victim should evaluate how easy, or how difficult, it will be to prove their damages.  While some types of damages do not need evidence that assigns an actual dollar value to the injury in a libel or slander lawsuit, some evidence of harm will be needed to prove other types of damages (like a loss of something that has economic value).

For more on Defamation of Character Damages under Florida law, read our prior posts:

Filing the Defamation Lawsuit and Going through Discovery

Once you and/or your lawyer determine that you have a case and that you can prove both liability and damages, the next step is to file your lawsuit.  In Florida, defamation cases are filed in our civil courts as personal injury cases.

Issues related to filing a defamation lawsuit include:

Once your lawsuit is filed, it follows the standard procedures for any personal injury case.  You serve the defendant with the complaint.  You wait for the defendant to file his or her response (called the “answer”).

Then you begin the “discovery process” with each side serving the other with formal requests for documents, requests for admissions, and interrogatories.  Depositions, with document requests and without, are taken too.

For more on depositions, see, What Happens in a Deposition for a Personal Injury Case?

Issues related to discovery in a defamation lawsuit include:

Perhaps the biggest part of discovery for the defamation plaintiff is determining the arguments that the defendant has to avoid responsibility.  These can include privilege, immunity, preemption and affirmative defenses.

The plaintiff may learn of these arguments and how strong or weak they may be under the law during the discovery process (or in their answer).

The first defense for any defendant is that the plaintiff has not met his or her burden of proof.  Before the defendant presents his or her own arguments, he or she will try and challenge your case and show the court that you have failed to make your “prima facie” case.

Truth as a Defense

Key to a defamation claim is that the statement in question is false.  The defendant may argue that this has not been proven because the statement was true.

You have a time limit to file your lawsuit. Florida law establishes a two-year time frame to get your lawsuit filed at the courthouse.  This is the Florida two (2) year statute of limitations for defamation found in Florida Statute 95.11.

If you have filed your case after the deadline, then it will be barred as a matter of law.

Here, the calendar will control.  Did you file your lawsuit within two years (730 days) of the date the statement was first made?  There may be controversy on when the statement was initially made, especially if it involves slander.

The defense can also challenge how you view your evidence.  The defendant may challenge the evidence you have presented with the following arguments or affirmative defenses such as:

Even if you can prove defamation, there are some defendants who are protected by law because of their position (known as an absolute privilege or immunity).  So, regardless of your proof of a false statement and the resulting harm, they will not be held liable for your damages.  They are immune from being held liable or they are protected by a legal privilege.

Examples of these kinds of legal barriers to liability for defamatory statements include:

In Florida, legislation has been passed to protect some defendants against defamation lawsuits.  Other states have passed similar laws, called “anti-SLAPP” statutes.

SLAPP stands for “strategic lawsuits against public participation.”  Florida has passed laws that fight against these kinds of lawsuits.

This is a specific defense provided by Florida lawmakers to defendants who are sued for libel or slander. You can read Florida’s Anti-SLAPP Act in Florida Statute 768.295.

Today, this law is an even bigger tool for a defendant who has been sued for defamation here in Florida.  Our post was written in 2013.  In 2015, the Florida Legislature amended the law to make it provide even more protection.

Under the amendment, courts have the ability to dismiss cases very early in the proceedings if the defendant can prove that the lawsuit has been filed as a means to pressure or intimidate someone’s statements on public matters.

The 2015 amendment expands the speech that is protected by the Florida SLAPP Act.  It also provides the SLAPP laws do apply to private plaintiff lawsuits.

There will be many opportunities to negotiate and settle your defamation case.  Settlement talks might begin before you even file the lawsuit.

In Florida, personal injury cases are usually required to go through a court-ordered mediation, which will involve a third-party mediator working to get the case settled before trial.

However, if you fail to resolve the dispute before the trial, then a jury will be empaneled and your case will be tried.  There will be opening statements by both sides, evidence will be placed in the record by your attorney and defense counsel, and then the judge will instruct the jury on the law (related to issues like damages, including the types that can be awarded – the lawyers normally try to agree on the instructions – if not, the judge has the discretion to decide on the instructions).

Jury deliberations will occur, and they will come back with their jury verdict.  When you win, the defendant may move forward with an appeal of the case if his lawyers feel there are legal issues and matters of law worthy of appellate court review.

Appeal and Execution on the Judgment

Appeals must be based upon valid questions on whether or not legal errors happened during the case.  Just being unhappy with the verdict, or thinking the result is unfair, is not enough to appeal a case in Florida.

Once the case is final, then you and your attorney can work on the execution of the judgment in order to obtain payment of the damages award.  The judgment is used to execute on assets owned by the defendant that are non-exempt (homesteads are not available for execution, for example).

The defendant will likely be sent a form titled “Fact Information Sheet“, form 1.977 found in the Florida Rules of Civil Procedure, where the defendant is required to disclose the nature and value of their assets.  One important question here is whether or not the defendant has insurance to cover for defamation claims (the plaintiff will know this answer early on in the case as the insurance company will likely provide a defense (a lawyer) to the defendant).

Can You Sue for Defamation of Character?

In Florida, most of us know that a person harmed by libel or slander has the right to recover damages from the person who made the defamatory statements.   However, most victims are not aware of how the legal process works with these lawsuits.  The most common questions include:

Every defamation case is different, both in proving liability and gathering evidence (Was the defamation made anonymously on social media? If so, how do you discover who made the statements? Will Facebook cooperate in identifying the party who made the statement? Will Facebook turn over a post that was made months ago but has been since deleted?).

If you believe you have a claim for defamation and believe a lawsuit is needed to collect compensation, a good piece of advice is to speak with an experienced Florida defamation lawyer to learn about some of the issues that can arise with these claims, including the type of evidence needed to prove a claim and the type and amount of damages you can recover. Most personal injury lawyers, like Alan Sackrin, will offer a free initial consultation (over the phone or in person, whichever you prefer) to answer your questions.